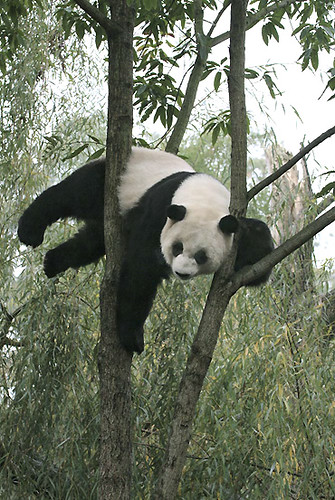 But remember we’ll still have the Red Panda. From the National Zoo Web site:

Tai Shan, the Zoo’s four-and-a-half-year-old giant panda, leaves for China on February 4 to be part of the breeding program that will help sustain giant panda populations in the wild. Giant pandas are endangered—only about 1,600 are left in the wild. Since his birth on July 9, 2005, Tai Shan has delighted millions of people from around the world.

Join us at the Fujifilm Giant Panda Habitat to celebrate Tai Shan and the Zoo’s ongoing commitment to giant panda conservation. It’s your chance to come say goodbye to Tai Shan and learn about how the Zoo worked to conceive, raise, and care for Tai Shan, as well as its other pandas, Mei Xiang, and Tian Tian.

The day will feature a variety of wonderful panda activities and giveaways:

* Panda keepers will be available to answer questions and talk about the Zoo’s giant pandas at 11:30 a.m., 12:30 p.m., 1:30 p.m., and 2:30 p.m. At 1:30 p.m., keepers will present Tai Shan with a special celebratory cake prepared by the Zoo’s Commissary.
* Panda interpreters will answer your questions about giant pandas, conservation, and the Zoo’s role in conserving endangered species.
* Zoo reproductive scientists will talk about panda reproduction, and all the work that went into Tai Shan’s conception and birth.
* Zoo veterinarians will talk about how they care for these rare bears every day.
* Zoo nutritionists will talk about what it takes to feed a bear that eats primarily a few very specific species of bamboo.
* Kids will have an opportunity to make a card for Tai Shan or to celebrate their favorite Tai Shan memory at the FedEx Card Delivery Station. Your card will travel with Tai Shan to China via FedEx.
* The Tai Shan Travel Timeline, sponsored by AAA Mid-Atlantic, will feature a travel TripTik, so you can see what route Tai Shan will take when he travels to China. Zoo conservation biologists will talk about conservation efforts taking place both here and in China. The first 500 people to visit this area will receive a commemorative Tai Shan photo postcard.
* The LAND O LAKES® Butterstick Tribute will showcase photos of Tai Shan since his birth. (When Tai Shan was born, like all giant panda cubs, he was about the size of a stick of butter. This earned him the affectionate nickname “Butterstick.”)”