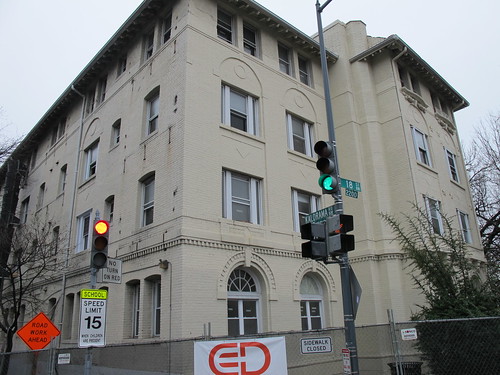 Last we spoke about the Sorrento building getting renovated at 18th and Kalorma in Adams Morgan. Jubilee housing is in charge of the project and they responded late to the discussion so I wanted to bring their comment to your attention:

“Greetings from Jubilee Housing. We have read this discussion with considerable interest. Just a quick response: Jubilee Housing is a nonprofit organization providing affordable housing and other life opportunities to more than 700 people in the Adams Morgan neighborhood of Washington, D.C. The organization began in 1973 when a handful of Church of the Saviour members mortgaged their own homes to buy two apartment houses, and soon after, the Sorrento. They worked nights and weekends to bring the buildings up to code for the benefit of residents, securing one small pocket of affordable housing in Adams Morgan. From that beginning, Jubilee Housing has grown to include seven buildings and an array of services for economically disadvantaged residents.

In the last five years Jubilee has completed five similar properties in the neighborhood, totaling 145 apartments, three after-school centers for children and youth grades K-12, and a daycare center for newborns, infants and toddlers. While the work is costly to restore the 80+ year old properties to modern condition, two-thirds of the total funding comes in the form of private equity, grants and other contributions. The City financing is important to the success of the properties, but is no greater than the per unit investment in many of the high end condominium projects sited by others bloggers in this string of comments.

Residents of Jubilee properties are proud members of the Adams Morgan community and, like everyone else in this conversation, contribute to the City’s well being.

For the record, the seven properties each had moderate rehabilitation when originally acquired by Jubilee, but this series of renovations is the first life cycle upgrade in their history. And the sign on the original posting is for Ellis Dale, the general contractor performing the renovation work.”