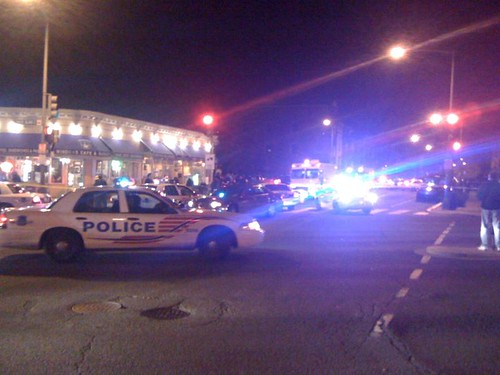 I received the following email from a reader at 7:24pm:

“I know that you’ve been featuring Bloomingdale quite a bit lately, and I just wanted to let you know that something’s definitely happening at Windows Cafe (101 Rhode Island Ave NW) on Rhode Island. We were just on our way home and the street is blocked off with police tape, there are loads of cops there, and we did see someone on a gurney.

Windows is one of the best businesses in our neighborhood, and I sincerely hope the news isn’t as bad as it seemingly looks.”

I just got off the phone with a different neighbor in the area at 7:45pm. The neighbor tells me that the word on the street is that a Pepco employee may have been shot. An ambulance responded and left the scene. Streets remain closed around Windows and police (over 12 cars) are still on the scene. A neighbor heard one gunshot. In my talks it is not clear who if anyone was injured and/or how severely. I’ll update as more info becomes available from MPD.