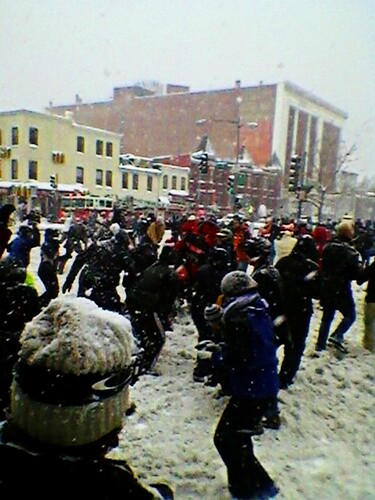 Thanks to Casey for sending these photos

From an MPD press release:

“The Metropolitan Police Department is looking into the circumstances involving the report of officers “pulling their guns” on a crowd that had been throwing snowballs in the area of 14th and U Streets, NW.

On Saturday, December 19, 2009, an off-duty MPD member was reportedly operating his personal vehicle in the 1400 block of U Street, NW, when the vehicle was suddenly pelted with a barrage of snowballs. The member who was in plainclothes, stopped his vehicle to inspect for any damage that may have occurred. He then reportedly identified himself and went to investigate a crowd that had gathered as being the possible origins of the projectiles. Due to the number of individuals in the crowd and developing traffic conditions, the member called for assistance.

Arriving officers from the Third District responded to the scene for the report of a possible man with a gun incident unfolding at that location. Responding officers cautiously approached the scene as is protocol with a potentially dangerous assignment such as an armed individual, but at this time there is no evidence that they pointed any weapons in the direction of the crowd or at any individuals. Those officers were quickly able to ascertain that the individual in question was indeed a fellow sworn member and were able to deescalate the situation quickly without incident or injury.

The original videotape footage shown yesterday by a local media outlet did not appear to visibly show the off-duty member drawing his weapon during the course of his actions. However, the department has subsequently received additional images and statements that would seem to support the allegation that the off-duty member did pull a gun. The Metropolitan Police Department is intent on conducting a full investigation in determining all of the exact circumstances surrounding this incident.

The Metropolitan Police Department has truly appreciated the cooperation from the community as we all team together to tackle the many challenges encountered during these severe weather conditions.” 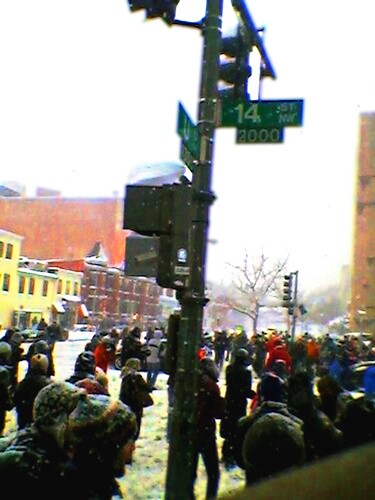