I received numerous emails about a police presence at 14th and Columbia. Here’s the word from CM Graham:

“I have just returned from a tragic scene at 14th and Columbia. Just before 10 PM, a nine year old boy was shot dead in the presumed safety of his apartment at 1433 Columbia Road. AT this time, it appears that there was some kind of fight in the hallway, shots were fired, one of which entered the apartment and killed this boy. I have the name of the boy (who happens to be Latino) but I am not releasing it since I do not know whether the entire family has been notified.

Chief Lanier and Mayor Fenty–who were both on the scene– stated that there are persons in custody.

MDP was out in force in the neighborhood, it being an All Hands on Deck weekend. Police were on the scene immediately.”

And in other CH crime news there seems to have been a huge police presence near Wonderland at 11th and Kenyon. A reader writes:

“Passed by Wonderland Ballroom about an hour ago (around 8:30pm Sat. night) and there were 4-5 police cars (some unmarked) with a healthy amount of uniformed and plain-clothes officers.”

There is some speculation among readers that it may have been a drug bust robbery with 3 suspects arrested. A very sad night all around. More details as they become available.

Photo of scene sent in by a reader: 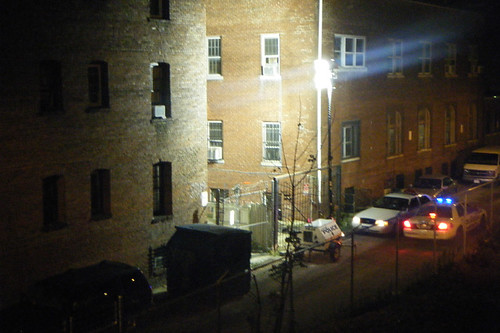