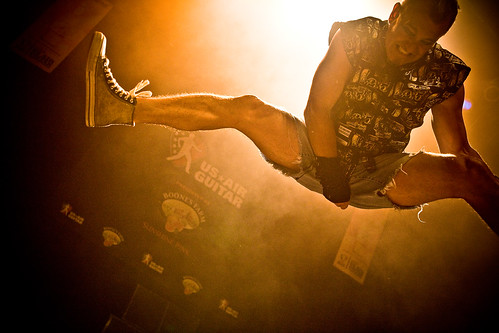 “Join Ten Miles Square and the Pink Line Project with the work of nine local photographers for the second annual Fixation exhibit.

These photographers each create a narrative with a short series of images, differentiating the stereotypical image of our Nation’s Capital from the people actually living inside it. Their photographs inspect our city’s individual subcultures and the people who thrive in them, whether it’s the intense rock convulsions of serious air guitar competitors or the eager characters at the local Renaissance festival. Some create their own scenes by simply coming together as bystanders, while others transit separately in search of the same something. What these images all have in common is a fixation on subculture carved out inside the story of this city.

Huge thanks to our beer sponsor PBR and event sponsor Scion for making Fixation possible.

Industry Gallery is located on the second floor of Conner Contemporary, at 1358-60 Florida Avenue NE. When it opens in 2010, Industry will specialize in 21st century design, focusing on international artists who create functional art from industrial materials.

From their Web site:

FotoWeek DC is a 501(c)3 nonprofit organization founded in 2008 to celebrate the power of photography. Our first annual weeklong festival brought over 20,000 visitors to the Nation’s Capital, galvanizing the Washington, DC community. Washington is unique in the photographic world, consisting as it does not only of a nexus of talented photographers, but also its far-ranging collections of photography. From national institutions like the Smithsonian to edgy galleries on 14th Street, the image is everywhere, and FotoWeek DC was created in part to pay tribute to this. The inaugural competitions attracted an astounding amount of high caliber work, and a photographic light show on the walls of the Nation’s monuments was, well, electrifying.

FotoWeek DC isn’t just about seven days or one city, however. Exhibitions continue throughout the year, including our most recent exhibition, Fotobama, at the Newseum. The educational, community building and informational exchange platforms we provide for photographers and photo enthusiasts have expanded to an international level, which is why, in 2009, our awards competition has gone global. Finally, as the first organization to recognize the need to create a photographic forum that engages people of all ages, races, and economic means, FotoWeek DC hopes to foster both grassroots initiatives and public/private partnerships to publicize global issues and encourage positive social change.

You can see the full schedule of events here. And Heather Goss from DCist makes her recommendations to the Washington Post here. Should be a great time!