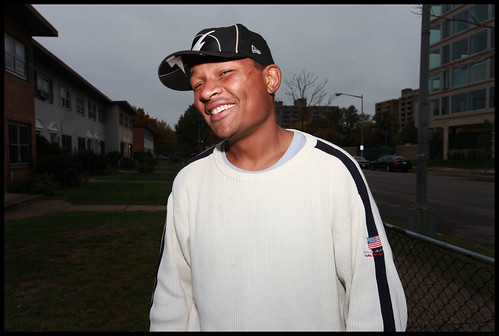 “I’m the stereotype of what all of you white folks think of black men in the ghetto. I’m 32, have five children who don’t live with me and served time for selling drugs. Don’t you judge me, though, because living here is hard as shit. I grew up in these projects in Southeast. Coming up in DC is fucking hard. There is a lot of racism and a lot of injustice. There’s a lot of fucked up shit going on, period. This is a political city and politicians need to care more about the people here and less about money. That’s how I feel.

“I ain’t justifying my actions, but unless you live this and spend every day on these streets, you can’t have no idea of what we deal with: drugs, police brutality, bad schools, no opportunities. That ain’t no way to live. People here become a product of their environment. You grow into what you see. It is hard for kids here to think that being a doctor, a lawyer or an entrepreneur is possible. The closest many people will get to success here is being a teenage mom or a drug dealer. That’s it.

“Every day is tough. If you’re not caught up in the loop, which is politics, you out of the game unless you want to sell drugs or get a lame-ass job that pays you nothing. You certainly not going to get nowhere if you play by the rules here. If you have setbacks and get into trouble, you really ain’t going to get nowhere. After jail, you are looked upon as if you can’t do nothing and there is no use for you other than being locked up again or out here selling drugs. I been in jail twice, first time when I was 20 for selling drugs. But now, I have a job and am trying to make right.

“People in DC need to care about what is happening on these streets and in these projects. For all of you in other neighborhoods, especially the white folks in Northwest, there ain’t no difference between us. It’s what’s in your heart that matters.”