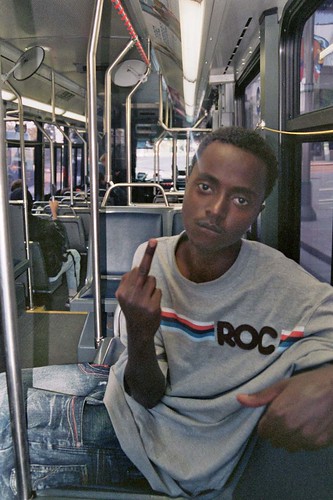 A “gangsta” kid on the bus in Hull!, originally uploaded by Steve Brandon.

Today I was walking home from work on 16th St. NW, about a block behind a large group of kids probably around the age of 14-18. They were generally being loud, boisterous, and threatening to those around them so I kept my distance. If it ended at that, I probably wouldn’t even be remembering this right now. However, every time a Metrobus would drive past them, they would start throwing some sort of projectiles (looked like snowballs or ice but couldn’t really tell). I could see everything they were doing and was probably far enough away to call 911 but didn’t do so, fearing for my safety. Now, when I think about it, I probably could’ve gotten away with calling, following the kids from a block away, and updating the police on where they were. However, given the priorities of the DC police, do you believe this is something they would even bother to respond to? Has anyone else seen a group of kids around this area doing this sort of thing? While some would see this as a break, throwing that crap at buses (or cars if they so decided to) could result in a major traffic accident.”

I definitely would’ve called 911. No question. Since there’s no snow on the ground they were clearly not throwing snowballs. Whatever they were throwing, it can be an extremely dangerous situation. If a similar situation would arise, I’d hang back and tell the cops where the incident(s) occurred and they will definitely send a car to investigate.

Would anyone else feel uncomfortable calling the cops in a similar situation?