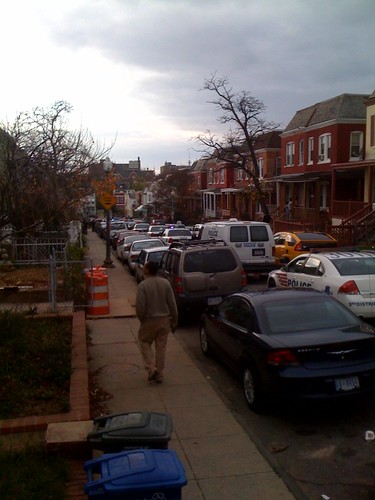 This past Saturday afternoon in the 700 block of Gresham Pl. there was an insane amount of police activity. Police cars came speeding down the street as if they were making some sort of huge arrest/bust… there had to be have been about 15 cars all blocking each other in, even a van on the small one-way street. They went into one house and and 5 minutes later went in another a few doors down. After about 15 minutes they began to disperse. I asked an officer who was walking back to his car what was going on and he responded that they had been receiving prank calls that an officer had been shot. When hearing that explained it kind of made me wonder is it really that easy to divert police attention? I would also think that they could do a better job at being able to substantiate a claim of an officer being shot.”

Wow, that’s insane. But I think you have to err on the side of caution in that situation. If there are reports of an officer shot and they can’t confirm they’re pranks then I imagine MPD definitely has to respond in full force. Terrible story though. The fact that people would prank like that and divert necessary resources to crap like this is beyond frustrating. I hope the caught the prank caller.

Read more →
More Stories
Photos From PoPvilleWhat the Helen of Troy are Potomacs?