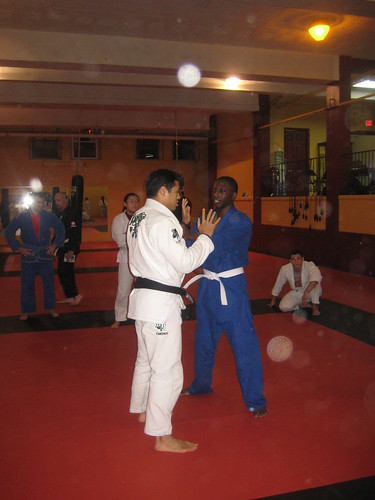 The following is a guest post written by Columbia Heights resident, Jimmy.

Walking west on Columbia Rd, between 14th and 15th streets, I followed the modest sign tucked behind a chain link fence that read “Brazilian Jiu Jitsu, Thai Boxing [this way]” to the basement level of Casa del Pueblo. Here I met Nakapan Phungephorn. If ever there was a guy I did not want to meet in a dark alley, Nakapan (or “Nak” for short) was him – and here I was, walking down that dark alley to meet him.

Nak holds a black belt in Brazilian Jiu Jitsu, a brown belt in Judo, is one of the DC area’s few certified Muay Thai instructors, and has fought successfully at the national and international levels in both Muay Thai and Mixed Martial Arts as an amateur and professional. Fortunately for me, Nak is as nice and welcoming as he is decorated.

Nakapan is the founder and one of several highly trained instructors at the BETA Academy Martial Arts studio. Tired of trekking out to Virginia for training, Nak and his wife, Melanie (both DC residents), chose to open their own studio in Columbia Heights for its proximity to metro and bus lines as well as its high level of foot traffic. Their primary vision is for BETA Academy to become the “go to” center for Thai Boxing, Brazilian Jiu-Jitsu, and Mixed Martial Arts training in the District. The move is paying off, as business is clearly booming.

Additionally, Nak recognizes the public concern regarding at-risk youth in the neighborhood. Not one to sit on the sidelines, Nak says, “Our ultimate goal is to develop a government funded youth program targeting local at-risk youth. The hope is to get kids off the street and channel their energy into a constructive activity while at the same time instilling character building values such as self-discipline, respect, and self confidence. These values are the core of our growing kids program which we currently offer to the general public at a discounted rate.” Continues after the jump.

Like every newcomer, I got a free week of training to decide whether this program would be right for me. For the sake of boasting my own toughness credentials I would like to say this stuff is not for everyone. But looking around the 5000 sq ft studio one recent evening I saw both men and women; young and old; athletic and not; big and small; black, white and everything in between – just about every walk of life imaginable – training together. Some want to compete, some are interested in learning the arts for self-defense, while others, like myself, just want something that will motivate them to stay in shape.

It’s a mixed lot; appropriately situated in the most diverse neighborhood in the District. Just another great part of the Beautiful Life.