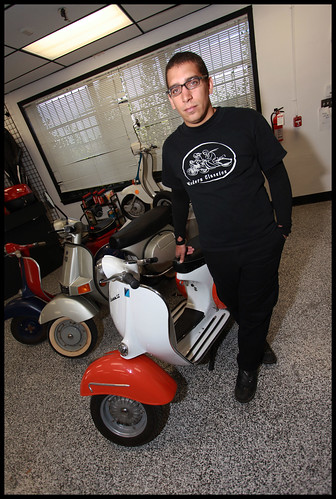 “I was born in Falls Church, then moved all over the country and then overseas and came back here for law school. I grew up around motorcycles. My Mom owns a Harley and I spent a lot of time around motorcycle clubs. When I was 16, I was living in Germany as an exchange student and went to Italy on a field trip. I was at the Spanish Steps in Rome and there was an attractive woman sitting on a Vespa. She is sort of a blur, but I remember the scooter. I guess that’s a bad sign! It was an early 1960’s burgundy Vespa with eight-inch wheels. It had a leopard print seat cover. From that point on, I wanted to get a Vespa.

“When I was in law school, I decided that DC would be a great place to have a scooter and I tracked down my first project, a 1985 Vespa. Within four months, I had six Vespas. Within a few years, I had 22. I would restore them and sell them to help pay for law school. I really love things with two wheels, that’s why I opened Modern Classics. The most important thing about Modern Classics is that we’re four people who are really passionate about scooters and motorcycles. We are the only full-service shop in Washington, DC so you can buy or fix bikes with us. Might as well keep the business in the city.”

“One of the things that I have noticed about being involved with scooters in DC is that a lot of the Vespa riders here seem to be more educated about scooters than in most other cities. DC is very white collar even though there are those of us, like me, who are blue collar by choice or circumstance. We have a lot of customers from places like The World Bank, people at embassies, and students. But, ridership in this city is really growing. I am constantly amazed by the people coming into my shop these days to buy scooters. I mean, big macho dudes like rugby and football players. You never would have seen that in DC fifteen years ago.

“Still, there’s been lots of times here when I have heard, ‘Get a real bike, you fag.’ But, I can tell you that if I take my motorcycle and go park it somewhere versus taking my Vespa out, the women love the Vespas. It draws a crowd. That’s not why I ride in DC, but it helps. Women tend to view it as metrosexual and guys who are insecure view it as homosexual. Sure, a Vespa doesn’t have the same testosterone level as a burly guy on a Harley, but some of us have to overcompensate and some of us under-compensate. But, I still think that it is really acceptable for anyone to ride a scooter in DC and people won’t judge you.”

Modern Classics is located at 955 V St. NE. Read more about motorcycles in DC from Kim at People’s District.