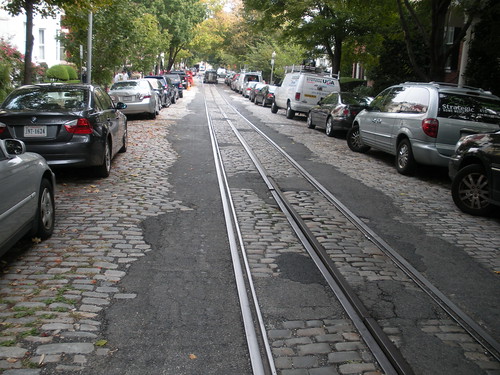 I know the rails have started to go in on H Street, NE. (Pictured above is an old school line from Georgetown.) Any predictions on when they’ll go live? How did they resolve the overhead wires debate?

Press release from an email:

“The District Department of Transportation (DDOT) is embarking on a public outreach tour to all eight wards of the District to engage residents and businesses in the implementation of improvements proposed for the transit system for the city, including streetcars.

DDOT initiated the study in 2004 as a joint effort with the Washington Metropolitan Area Transit Authority (WMATA). It included a comprehensive public outreach program and a multi-corridor Alternatives Analysis that evaluated modes of transportation (bus and streetcar) and an implementation schedule for transit improvements in the District. The Interim reports of the study recommended a number of improvements, many of which DDOT has already implemented, such as bus improvements on Georgia Avenue/7th Street, 16th Street, and the Metrobus 30s Line with the launch of express services.

DDOT has already initiated construction on two streetcar lines, and the open houses will give District residents an opportunity to hear about the current progress and view updated plans for future streetcar lines and other exciting transportation investments across the District. Schedule after the jump.

The dates and locations of the open houses are as follows:

All open houses will begin at 7 pm and end at 8:30 pm. The program for all eight open houses is the same; it will consist of display boards, maps, information about the proposed system, and opportunities for participants to speak individually with and ask questions of project team members. The open houses are open to the public, and no RSVP is necessary.

Recommendations from the plan have already been implemented as seen in bus improvements on Georgia Avenue/7th Street, 16th Street, and the Metrobus 30s Line.

Now in 2009, with a growing population and employment opportunities and the need for greater economic development for residents in the District, DDOT is revisiting the District’s future transit options, and is looking to engage residents to comment on the recommendations.

For further information, please visit www.ddot.dc.gov/dcstreetcar or contact the project hotline at (703) 682-5060.”