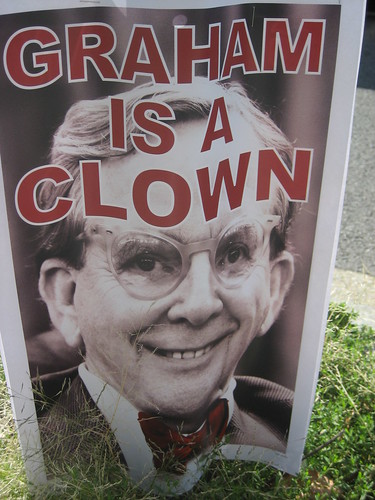 I was sent a tip today that these posters were plastered all over the Adams Morgan plaza at 18th and Columbia. By the time I got there all the posters had been removed. I did however spot this one on 16th Street. CM Graham sent out an email today saying:

“In regards to the recent arrest of Teddy Loza, we should all be patient while the authorities conduct their investigation. Corruption is a very serious matter. As much as anyone else, I want this investigation to be thorough and all guilty parties held to account. I have pledged 100% cooperation to the FBI.

I have committed no wrongdoing or crime.

Please also keep in mind that the Washington Post on September 30 reported—based on law enforcement sources– that I am neither a “target” nor a “person of interest” in the FBI investigation.”

While the charges against his chief of staff – Teddy Loza, are very serious, I’m wondering if Graham deserves this treatment? If Graham truly did have zero involvement in this incident, if I were a Ward 1 voter, I’d vote for him again. I’d say Graham’s net contributions to the improvement of Ward 1 far outweigh his poor judgment in choosing a chief of staff.

I have heard in the comments that some readers have received robocalls denouncing Graham in Ward 1. I think I read that they were sponsored by the DC Republican Party. So for the FQoTD – who do you think paid for and posted these signs around Adams Morgan? Do you think they are appropriate?