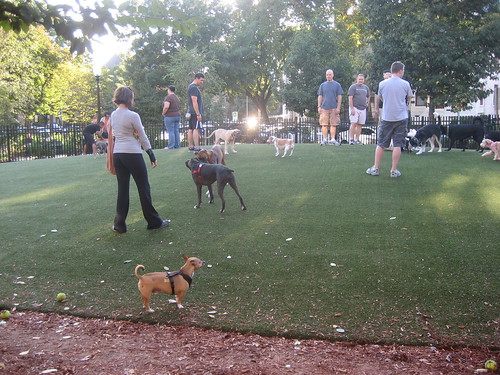 The new dog park at 17th and S Streets, NW has only been open for a few weeks but I’ve already received a number of emails about it. I’m told that, perhaps due to the rain, the park can be smelled from a block away. I walked by Sunday afternoon to ask some pedestrians and folks in the park what they thought. Every single person I spoke to said the park did not smell particularly bad, with or without the rain. One woman in the park told me she lived half a block away and has never had a problem with the odor. For me, I’d say it did smell a bit of wet dog. But as someone else told me at the park – “it probably smelled of wet dog because there are tons of wet dogs in the park”. However the funniest comment came from someone who said, it doesn’t smell like wet dog, rather “it smells of dog shit near the entrances where the trash cans are filled with dog shit”. Ah, very good point. Indeed the entrance did have an overpowering smell of dog shit. But the question remains – can you smell the park from a block away? For those that live nearby – is the smell overwhelming? Do you think it has anything to do with the rain and/or artificial surface?

Thanks to Ashley for sending “Spock the Frenchie at the Takoma Park farmers market!” *This series features any pets in a backpack/bag/vessel. On metro, or not. Corgi, or not, and…

courtesy Yoga Heights From a press release: “Yoga Heights, a DC based yoga studio with locations at 3506 Georgia Ave. NW. and 255 Carroll Ave NW, announced today that they…

From an email: “Presented by No Kings Collective and the DowntownDC BID, the Franklin Park Block Party is a celebration of the much anticipated renovation of downtown DC’s largest green…