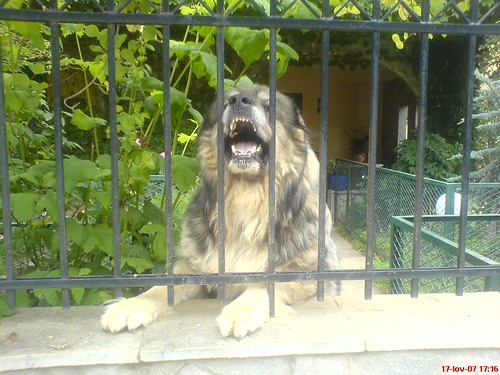 Ed. Note: photo found on Flickr not the dog in question.

I am a dog lover (we have 2) and so while the dog is annoying I am really upset at the owners. This dog is fenced in an empty lot that is over-run with weeds and debris. It stays locked up inside the fence all day and has never been out. It has a big tent with a dog house under it, and the owners come by at least once a day, so it gets adequate shelter and hopefully food and water but little exercise or love. The owner says that the dog is from a long line of military attack dogs and he is training it according to some German military dog school to do God only knows what. (clearly not training it to lick babies faces) The dog barks all day and all night at everything. It has become beyond annoying for everyone in the surrounding houses. Isn’t there noise violation laws?

Also, I just can’t believe that it is legal to keep a dog locked up in an empty lot that you (possibly) own in a neighborhood that you don’t live in. The owner shows up on bike everyday to “train” the dog for a few hours and then takes off. Can you really just buy a lot and put up a fence and house your dog there? The lot isn’t even properly maintained. Finally, if the dog gets out he is going to seriously injure or kill someone. Is it legal to own and train a dog in this manner? There are lots of little kids in the neighborhood and I just feel it is only a matter of time before someone gets hurt. I have talked to several neighbors and all of us are very upset. Animal Control has been out twice and apparently approves of this and the city has been out twice and apparently approves of the current state of the trash strewn and overgrown weed infested lot. This dog needs a new home and I need help on how to get this done. Any suggestions from the PoP Nation would be most helpful.”

This seems like a very sad situation. We sorta addressed this issue last December when Albemarle, MD was going to pass an ordinance stating if a dog barks for more than 30 minutes it’s owners could be taken to court. At the time folks didn’t think the police would be able to enforce such a law. But what do you guys recommend in this particular instance? I wonder if you could talk to the owner and mention that the barking has become a problem? Or should animal control be called? And, per the reader’s request, does anyone know DC’s laws regarding noise violations?