Support PoP!
Search
Dear PoPville, What the Helen of Troy is This 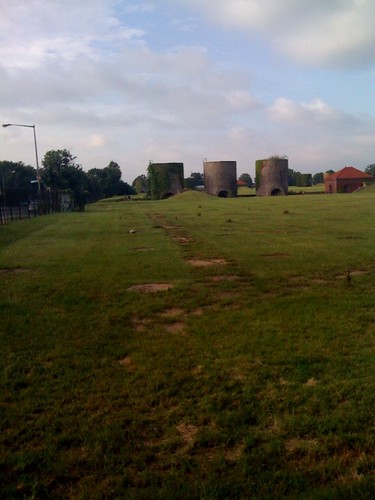 I have lived in DC for almost nine years and I still don’t know what the cylinder structures are on the corner of N. Capitol and Michigan near WHC. I have wondered for so many years, I pass by them fairy regularly. I almost don’t want to know; I like the mystery. But I think it’s time I figure it out. I can’t seem to find the info anywhere and no one seems to know. I attached a photo while I was biking on my way to work. Sorry it’s not very good quality.
Can you help me?”

Sure, this is part of the McMillian filtration site. According to Wikipedia:

“To handle population growth and municipal sanitation needs, officials added the McMillan Reservoir Filtration Plant in 1905. This facility implemented an innovative water purification system relying on sand instead of chemicals to filter 75 million gallons (280 million liters) per day. It helped quell typhoid epidemics and other communicable diseases throughout the city.

In 1907 the reservoir and filtration plant were named in honor of Senator James McMillan of Michigan, who chaired the Senate Committee on the District of Columbia and supported development of the water supply facilities.

The old water treatment site was purchased by the District of Columbia from the federal government in 1987 for $9.3 million, and since has deteriorated due to lack of maintenance. The question of what to do with the property is up for debate.”

There are currently plans to redevelop this site but I’m not sure what the status of those plans are. I also heard they once found a dead body in one of those structures…

photo by Erin “Dear PoPville, Where is the best place to donate electronics where they will get into the hands of people who will use them?

Read more →
More Stories
Best Spot For a Morning Cup of Coffee, Mojito, or Gin and Tonic…Progress on New Bar Coming to Bloomingdale