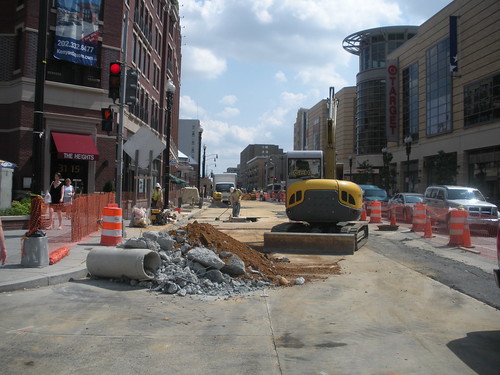 As I was walking to the CH metro this morning along 14th Street, I noticed that a huge construction effort had begun on the road in front of Target…I’m not talking about the plaza/fountain that they’ve been building, but it looks like new work. Didn’t they just tear up that road recently? What on earth could they be doing now? It’s SO annoying to be honest. Traffic is just going to get worse, and the area is just AWFUL looking and LOUD. They should have fixed the roads (or whatever is within), BEFORE putting in this shopping district. As a resident of the area, all the construction simply sucks. ughhh.”

The plans for 14th Street reconstruction has been in the works for quite a while. It probably wouldn’t have been possible to fix them before the shopping center went in because all the construction trucks would’ve torn up the road. I forget what the time frame is for this section of 14th Street but at least Park Road is nearly finished…

You can see more about the Columbia Heights Streetscape plans here.