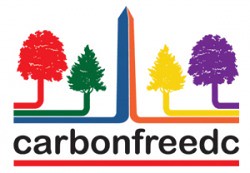 1141382, originally uploaded by Prince of Petworth.

Ed. Note: Speaking of carbonfreedc I officially sold my car Tues. night! Also, you guys had a definite impact on the $20,000 grant – back in July I posted a Dear PoP asking you to vote for carbonfreedc and they won!

The Extreme Green Neighborhood Makeover aims to help 20 deserving families green their homes and lower their energy bills with energy-efficient upgrades, weatherization, water conserving enhancements and much more. As part of the project, CarbonfreeDC will host educational workshops in the selected neighborhoods to help others take action in their own homes.

CarbonfreeDC is excited to announce the DC neighborhoods of Deanwood and Shaw have been chosen to be a part of the Extreme Green Neighborhood Makeover. Thanks to Pastor and Mrs. Newell of the New Covenant Evangelistic Center and Commissioner Sylvia C. Brown for their compelling nominations that lead to our decision to choose these neighborhoods. Now we will go about the process of choosing 20 deserving homes from these neighborhoods to receive the green makeover treatment.