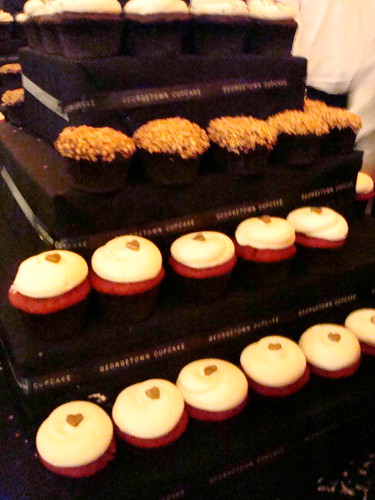 Ashley runs the Web site, From Komi to Marvin which she describes: “After living in D.C. my entire life, I realized that I had only eaten at a third of the restaurants on the Washingtonian 100 Best list. So I decided to take a year, and eat at every single one–no matter how geographically far away, or culinarily unappealing. I’m not a reviewer, just a gal who loves to eat.” In this guest post Ashley covers some of the food trends she has encountered along the way.

First there were charcuterie plates and sweet potato fries. Then came the juggernaut known as cupcakes. Then frozen yogurt “restaurants” and sliders came on the scene. Food fads are nothing new, but it seems lately that restaurants in D.C. have been forced to take sides in the trendy foods versus classic menus. Those restaurants that have stayed true to their roots have either flourished (like Kinkeads, which still puts out solid if not a little predictable seafood), or failed (such as La Paradou, which closed this spring after many years as the go-to French restaurant in Washington). For the most part though, the restaurants that hop on the trendy cuisine gravy train are the ones Washingtonians are talking about.

And what are the trends? Well, last year it was undoubtedly wine and cupcakes. It seemed like within months, wine bars were popping up all over the city. Cork, Mendocino Grille, Vinotecca, and Veritas were the pioneers with Enology, Inox and Room 11 joining the party later in the game. To follow a boozy night out, along came the cupcake bakeries—because the cure for a tannin hangover is no doubt sugar and food coloring. Georgetown Cupcake paved the way, with their too-cute Range Rover parked outside and their inexplicable long line of size zero girls wrapping around Georgetown. Smelling a sugary gold mine, bakeries like Hello Cupcake and Lavender Moon in Alexandria opened up. Counter service places weren’t the only ones in love with adorable baked goods—well respected, expensive, can’t-wear-jeans restaurants join in on the fun. Art & Soul, an expense account friendly restaurant on the Hill, has them on their menu, as well as Bar Pilar and Clyde’s. Continues after the jump.

In the wake of the wine and cake movement, chefs in town have stepped it up and come up with some pretty far-fetched trends that seem to have actually caught on. The first is undoubtedly the deviled egg. What most would consider at home next to the Jell-o mold on Grandma’s July 4th spread, deviled eggs are showing up on the menus of plenty of well-respected restaurants around town. Founding Farmers, with their down-home feel, has not one but two different interpretations. 2 Amy’s gives their eggs an Italian spin with a garlic pesto served along side. And Jackson’s Mighty Fine Food in Reston goes wacky with their version, mixing in watermelon rind and jicama in the filling and serving them with candied bacon. And the list goes on: Carlyle, Acadiana, Hudson, and Ray’s the Classics (albeit with decidedly un-picnic steak tartar as the filling) all put these ’60s era delicacies on their menu. 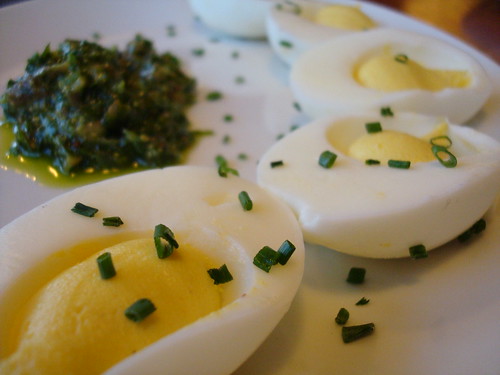 Another new and improved menu item on the scene is the haute BLT, which seems to be popping up all over town. No longer is it a sandwich made by your mom when she’s got leftover bacon and not much else in the house, now its cuisine. Westend Bistro has a very fancy version with an avocado mousse (neither B, L nor T) and pistachio oil. Or the one from Nage, with crispy pork belly (a distant, delicious cousin of bacon, so it counts) and caper aioli. Or if you’re feeling nostalgic for times spent sweating through summers in the Deep South, you can munch on Blue Ridge’s BLT with fried green tomatoes and pimento cheese spread.

The truth is, as long as inventive chefs like Michel Richard and Morou are on the scene, wacky things are going to be coming out of the kitchen of D.C.’s more exciting establishments. So what’s next? Pork belly rinds? Roquefort Cheetos? Only time will tell, but without a doubt, all this trendy ingenuity only serves to remind us home chefs how utterly unoriginal we are.

Or are you? What clever dishes have you come up with?