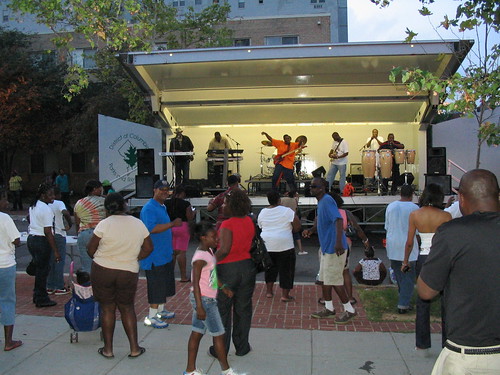 Ed. Note: On Friday, I walked by this section of Columbia Road but did not return home in time to blog about it. I did give my card to a Police Officer and requested that she tell me about similar events in the future.

“One of the best events over the weekend was also one of the saddest. A super street party with a great live band, a peaceful neighborhood dance party that unfortunately no one in the city, or most of the neighborhood even knew about! It was taking place on Columbia Rd. at 14th St. Fri. evening, not 100 yards from my back door, but I only discovered it when I had to take the dog out. (I heard music earlier, but I was working, and loud music on a summer night isn’t unusual from over there.)

This was a major event – part of the “safe streets” campaign, with a flatbed truck stage and a really fine 7-8 member band made entirely of talented cops! I hung out until they ended around 9 and there were never more than maybe 200 people, all pretty much from the adjacent 2 blocks. None of my neighbors on Irving St. had heard of it. There were no flyers posted, no notices taken door-to-door, no email from any of the various email lists, nothing from Jim Graham’s office (and you know he’s quick on the email draw when it comes to shootings!) no mention on any of the neighborhood blogs, nothing in the Post. I had driven down Columbia Rd. at 2 that afternoon and had no idea anything was about to happen. 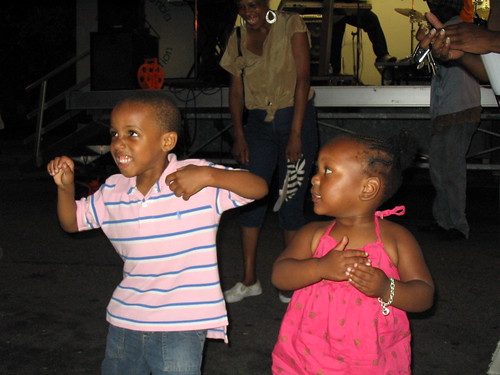 Columbia Road is a major street, and you don’t put something like this together in a week! I spoke to an officer, (I believe she was actually the assistant police chief) who admitted that they had kind of dropped the ball in that department. I spoke to another couple of officers who had helped organize the event, and neither were really aware of neighborhood blogs or listserves and had never heard of Prince of Petworth, DCist, Columbia Heights News or any others.

Here was a brilliant opportunity for our diverse community to come together in a really fun event and it was sad to see it overlooked. I know there are a lot of people in PoP land who are always looking for ways to make our good life a little better, this might be a great opportunity for someone to volunteer with the police dept. to be a sort of blog & neighborhood list-group co-ordinator/liaison.

I’m also curious about why, in the hour that I was there, I saw almost no-one from “outside” – (well, no other way to put it – no white people) join the fun. The music had to have been heard all around the DC-USA area and it was a lovely night with people outside. Did anyone stroll down a block and check it out? If not, why not?” 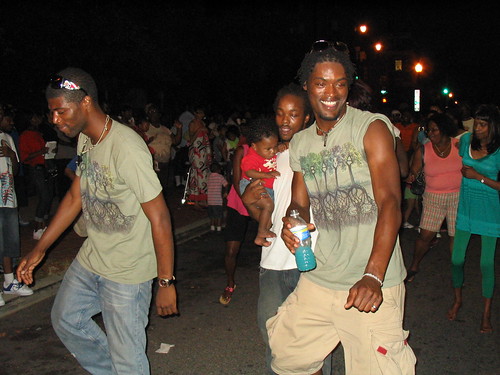 Read more →
More Stories
I Had to Beg a Guy to Let Me Take This PhotoIt’s Confirmed! The Folks behind Marvin Coming to 3815 Georgia Ave!