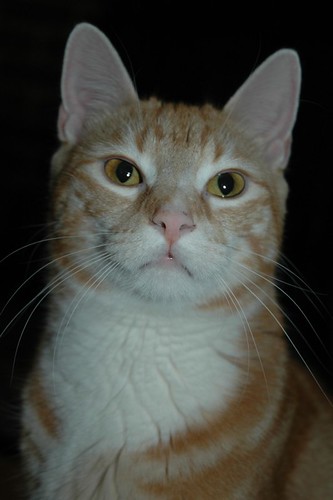 The following story written by “WDC” was inspired by yesterday’s post, The Mice are Menacing. Even though it doesn’t take place in DC I thought it was a great story. The photo is actually the author’s pet – Colby. The cost of publishing Raider’s photo is far too high for this little blog.

“Cities have mice. Even urban ivory towers are invaded from time to time, a reality to which a certain high-profile business school in a city somewhere north of here can attest. The University Powers fervently believed in the market. It’s their bread and butter, after all. So they hired experts… the more expensive, the longer the wait, the better. They bought gadgets and potions with the kind of frenzy one normally associates with the tricking-out of Republican vice-presidential candidates. To no avail. Staff snacks were continually defiled. Co-eds still had daily excuses to shriek and jump into the arms of waiting swains. Chaos threatened.

The University Powers formed committees, dispatched consultants, thought outside the box, leveraged resources, circled back, sought buy-in, touched base. I can only assume that the first person (likely a newcomer to the University, unfamiliar with their ways) to suggest getting a cat received stares disbelieving, withering, and contemptuous. But in the end, ever more desperate for a solution, they agreed. Of course, it had to be a cat worthy of the University. His name was to be Raider. As in, Corporate. This was decided before the junior member of the committee was even dispatched to the animal shelter, I’m sure.

Raider joined the University staff. He was housed in the basement of an administrative building, sharing his space with I.T. and H.R. He was assigned an email address and Outlook calendar. Should any staff member spot a mouse in her environs, she had only to send a scheduling request to Raider via email. At 5:15 in the evening, Raider was brought to the office, with all his accoutrements—food, water, litterbox, and a small radio. Raider worked best with a little music. (I imagine it like that scene in Reservoir Dogs.) His visits were so efficient and (presumably) ferocious that the mice didn’t return for months afterwards. He cleaned up after himself, too, depositing his leftovers in the litterbox, so as not to alarm the office’s normal occupant. And by 7:45 the next morning, he was tucked into his carrier and returned to the basement of the administrative building, where he spent his downtime sleeping in inboxes and file drawers, and shredding any bulletin board within reach.  Continues after the jump.

This all happened many years ago, but I like to think that Raider is still curled up on top of a warm photocopier, waiting for the next call. Or perhaps that the torch has been passed to some cocky new cat with well-groomed whiskers. Or at the very least, that the University Powers will remember that the newest, priciest, most-demanded solution is not always the best one. There has to be a business-school moral to this story somewhere… “