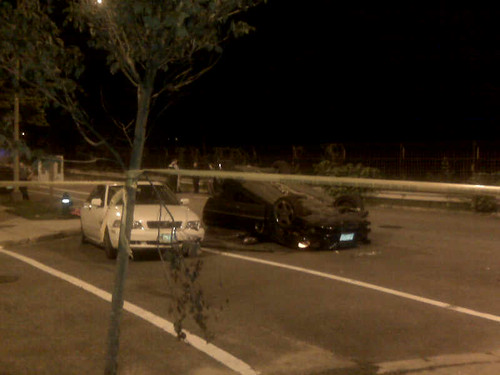 Thanks to all who sent in photos:

“Here’s a pic of the overturned car at Otis and Park Pl. The story I heard was that the shooting started at Warder and Quebec. The guy in this car, got into his car and sped off. He had been shot. The white car had been parked along Park Pl.”

And from MPD via CM Bowser:

“On Monday, June 22, 2009, at 2156 hours units from the Third District were dispatched to the 600 block of Quebec Pl., NW, for the report of a shooting. Moments later they received a second run for a traffic accident involving an overturned vehicle two blocks away at the intersection of Park Pl & Otis Pl NW. Upon the arrival of the officers they located an adult female in the 600 block of Quebec Pl NW, suffering from a gunshot wound to the leg. They located a male victim at the scene of the traffic accident in the 3600 block of Park Pl., NW. The male was suffering from multiple gunshot wounds which, it was learned, he received while he was in the 600 block of Quebec Pl., NW. The DCFD responded to the scene and transported the victims to area hospitals. The male was transported to MedSTAR, where he was pronounced dead at 2350 hours.”