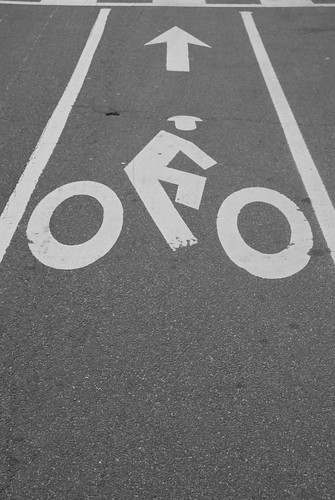 The following was written by Bill Crandall.

Years ago, back in DC after living in London for a period of time, I was heading downtown late one morning by Metro. Already a little unnerved by the sterile quiet, compared to the slightly seamy vitality of the London Underground, I overheard two young suit-and-tie guys talking. About their commute. Something like, “Yeah, after morning rush hour I can take this or that road and shave X minutes off the drive, plus the parking garage is cheaper after 10am…”, with the other guy nodding intently and sharing his own strategies.

I thought – as any self-respecting early 20s aspiring rock musician would – could anything be more boring, more indicative of a decline into numbing soulessness than having nothing else to talk about than your commute?

But especially in Washington, where work life and home life are so neatly segregated, the morning and evening commute becomes a third ‘place’, a sizable chunk of the week for most people. Why sacrifice such time, simply passing from point A to B? Many turn inward, swathed in an iPod cocoon for the duration. But what about the life and landscape and backstories that surround us as we trundle along in our stoic self-containment? Continues after the jump.

Of course, easy for me to say, I’m a native Washingtonian. Every corner of the city seems to have personal history. And my commute is by bicycle, through some of the most interesting neighborhoods in DC. I guess the slow crawl down 270 every morning wouldn’t have the same appeal. One recent morning, my wife and three-year-old daughter still asleep, I hoisted the bike down my front porch steps on the way to my teaching job at a nice private school across town.

Getting on my bike, I glance at the problem house across the street, unaffectionately called La Casa by neighbors. It’s quiet, unlike the night before when police and paramedics swarmed the place after a couple of drunk guys got into it, one stabbing the other. All the upstairs windows and screens are full-open, curtains blowing.

A neighbor’s surly dog charges their gate as I roll past, as usual. He always stops short and gets a look on his face like, ‘oh, it’s you… very well, continue on’.

Then it’s my riding tour of fault-line DC, where demographic worlds meet much farther east than they used to. Down New Hampshire Avenue to the Metro, where the Park Place development is nearly finished, finally putting some ‘there’ there. The smell of jerk chicken already wafts in great plumes from the kitchen vent at Sweet Mango Cafe. Around the Metro entrance, blacks and increasing numbers of whites navigate each other uncertainly.

Past Georgia, I try not to get creamed (or doored) on the fast stretch of New Hampshire down to Park Road. At 11th and Park, across from Red Rocks Pizza, a modest new building is well on its way up, in place of the old Bi-Rite supermarket.

Jump the light a bit at 13th to get ahead of the cars, wave hi to a friend walking the opposite direction, east, to her teaching job at a public school not far from my house. Turning left at 14th and Park, I see that work on the promised plaza has finally begun, and yes, those trees they planted recently were apparently just placeholders. One sapling, the first casualty, lies in an inglorious heap in a wet mound of gravel.

Right at Irving, against the traffic but using the wide sidewalk along the new Target complex. I wonder when the tea place will open next to the new ‘gastropub’. Mostly white young professionals head to the Metro from the direction of Mount Pleasant, against the tide of mostly black and Latino kids heading the opposite way to school. On a few early morning occasions I’ve noticed Ian MacKaye walking along near here in no big hurry, right by the former Wilson Center (now Capital City Charter School) of early 80s punk lore. Wonder what he’s thinking.

Left at 16th Street, noticing the little blue ‘Evacuation Route’ sign for the first time, perched discreetly on top of the street sign.

Right on Harvard, near the All Souls Church where my parents met at a social hour in the early 60s. Past the Harvard Hall apartments, where my wife and I lived for five years before planting our homeowner flag just beyond the moving fault line. ‘Pioneers’. Or gentrifiers, I suppose, but that’s a whole other can of worms.

Around the corner at Lanier and Calvert, where the road is finally repaved and the fancy new black streetlights stand ready to take over from their tired predecessors. On the left, in front of the Exxon, the city has reclaimed a former turning lane for pedestrian use. Toward the Calvert Street bridge, I pass ESL Music, home of Thievery Corporation. Eric Hilton is an old friend who introduced me to my wife. I remember when Eric used to come see my band play in the early 80s, now he’s the closest thing DC has to a homegrown rock star. (Ok, maybe Bob Mould, but he moved here recently from NY.)

Past the Marilyn Monroe mural in Woodley Park, still looking good after all these years, someone must be keeping her touched-up. Up the 29th Street hill that I detest, mainly because it lays bare whether I have any energy that day. Approaching the school, parents are pulling out of the parking lot, I see and half-wave to a long-ago rock bandmate who just dropped off his 9th-grade daughter. But he doesn’t see me, lost in thought and off to work in his Camry.

I pedal through the school gate. The main building, an old white estate, gleams on the hill. Well-behaved kids with good backgrounds file into classes. The cathedral looms peaceably off to the right. As it’s warmer today I grab the last space on the bike rack.

Check the time, 25 minutes door to door, spot on time. Long-forgotten Jam lyrics for some reason come to mind:

Good morning Smithers-Jones
how’s the wife and home?
did you get the car you’ve been looking for?

Let me get inside you, let me take control of you,
We could have some good times,
All this worry will get you down,
I’ll give you a new meaning to life –
I don’t think so.