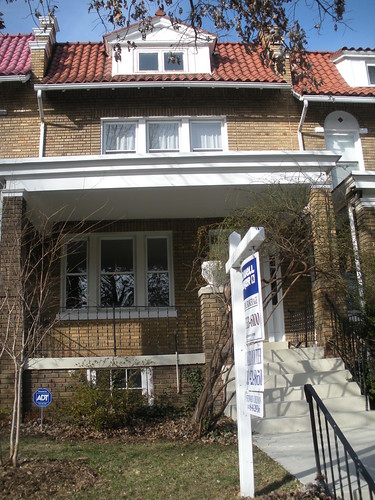 Bank Owned?: No.  This was a family estate.

Listing History: This property had been owned by the same family for many years.

The last time I sold a house on this block, it was to an architect, a few years ago.  Shortly after this home came on the market, I had clients, a couple who were both architects, make an offer.  The house was listed with one of my very favorite listing agents, real estate veteran and 16th Street Heights Maven, Denise Champion-Jones with Long and Foster.  (If you see any house with a sign that says, “Champion Collection”, it’s one of Denise’s listings).  We went back and forth for a while, but ultimately, based on what they figured they would have wanted to invest in renovations, we never came to an agreement.  The Sellers held out and, according to Denise, ended up selling to someone who had previously been looking at condos and thus saw the value of all that space and yard.  (My clients ended up getting a really cool and even bigger house off of 16th Street NW).

The general consensus of the “Good Deal or Not” (GDoN) commenters was that this unrenovated home would sell around $400,000.  Less the closing cost subsidy, it sold for $445,070 and was on the market for less than two months.

The other house from the GDoN post, that is on the same block, with some updates and priced much higher, is still on the market.