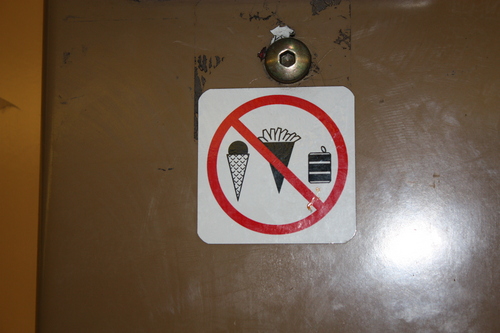 No Fries Allowed on the Metro, originally uploaded by mojavesin.

I’m not sure about you, but I am really hopeful that Metro does not make a decision to allow food to be sold and consumed in the system. One of the key differentiating factors of our System (in relation to others in the country, and, across the world) is its cleanliness. I fear that allowing food to be consumed will lead to a rapid degradation of its cleanliness and, in fact, may actually lead to HIGHER costs for Metro to keep it clean (as opposed to improving their cash flows as they are actually hoping for).

To email a comment directly to Metro management:
http://wmata.com/about_metro/contact_us/ridercomment.cfm”

Hmm, I think I’m gonna have to agree with you. If everyone was responsible and took their garbage with them I don’t think it’d matter. Sadly, I don’t think that would be the case. I’d rather keep the metro clean than be able to eat on it.

What do you guys think – should eating be allowed on the metro?