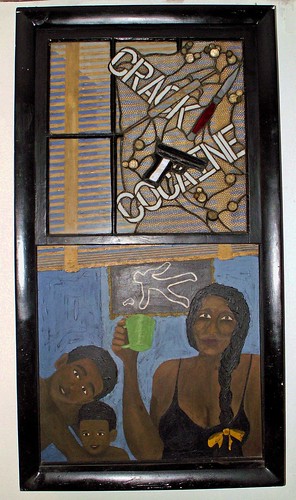 I live in a new condo building in Petworth. Before that, I’ve lived in group houses in Petworth and Columbia Heights since 2004, so I’m not unfamiliar with the neighborhood. As I was taking my bike from my apartment out the back door, I was surprised to see 2 people smoking crack… right in the doorway. They saw me, looked up then gave me a look of supreme annoyance, because I was obviously inconveniencing them. I didn’t really want to deal with them, so I just went back to my apartment, made sure my windows were locked, and went out the front door instead. Eventually the two wandered off. This surely isn’t the first time I’ve seen someone smoking crack in a semi-public place. I use to have a next door neighbor who would sit on back porch many a night and whip it out. It was pretty depressing to watch that persons life slowly fall apart over a long period and eventually the person ended up in jail. I’ve also watched someone in my own family deal with an addiction to meth over the years and so maybe I’m just desensitized to the whole tragic spiral and have become brainmush neutral to seeing junky behavior up close and personal. I guess this kind of neutrality is why I had no urge to call the cops…. at that time. But later, I thought, (as I’ve had this though before in my life) I don’t want to and refuse to live that close to junkies. Although, I also don’t like the idea of just literally throwing people in jail for an often fatal substance abuse problem.

I am wondering how your readers feel about crack use in the district? Are people less neutral than I am about it? Was crack use really about 10 times worse in the 80’s and 90’s like I always hear? What are some ideas?”

These are good questions. I’ve only seen some of the small baggies on the street but I’ve never seen anyone actually smoking crack. I’m very curious to hear what other folks have experienced. Do you see folks smoking crack in your neighborhoods? Is crack still a huge problem in the District?