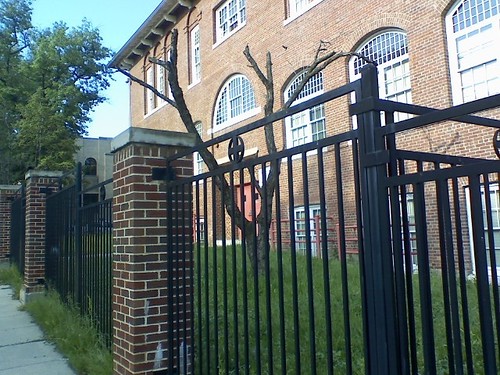 “Attached is a photo of the 8th Street side of the 810 Sheppard Street, NW Police Facility.

When I moved to Petworth 6 years ago, we were told by the chief of police that this building, which underwent a $10 million renovation, was to be a beacon for the neighborhood which had seen tough times. The tree in the picture was dead six years ago and it is dead now. I don’t think it is coming back. If the neighborhood revitalizes, I am fairly certain the “beacon” will have little to account for it. For 6 years I have walked past the dead tree on the way to Metro to go to work. At the moment the dead tree has knee-high grass around it. My father was a police officer in Nassau County, NY for over 30 years. I know he wouldn’t have walked past a dead tree on his way to the office for 6 years; he probably wouldn’t have walked past a dead tree for 6 weeks. He would have picked up the phone and told someone to do their job and remove it or he would have taken a saw to work and cut it down himself.

I have watched the pot smoking, drug sales and drinking in parked cars on Taylor Street and around the Recreation Center and have wondered about the close proximity to the police building and I realize now that it all makes sense. There is ZERO connection between the persons at work in the building and the neighborhood they work for. All the talk by the police about the neighborhood and importance of community in police work is just that – talk. Forget the ongoing crime issues – this dead tree and the fallen parking space numbers that litter the parking lot and the general decrepitude of the facility’s outside areas are the best evidence of the attitudes of the workers inside this building toward the people living in the surrounding area.

Who do I have to ask for permission to cut down the dead tree and drag it around to the other side of the building and put it in the dumpster?”

I think this letter raises a very important point:

“There is ZERO connection between the persons at work in the building and the neighborhood they work for.”

I have to say I kind of feel the same way. Once on 14th Street a bit south of Red Derby I saw some police talking with residents and I felt like this was a great step in the right direction. I’m sad to say, at least it feels like, that may have been an anomaly. So what is it going to take to get a connection between the officers who serve our communities. I mean I know they have a very important job to do. Preventing crime and capturing criminals should be their number one priority. However, most feel that there is a correlation with that and closeness with the community. What can cops do to actually change this perception/reality. I feel like a neighborhood cookout is just not going to cut it. I really feel like regular foot patrols (with the right officers) are the only way. Am I missing another way?