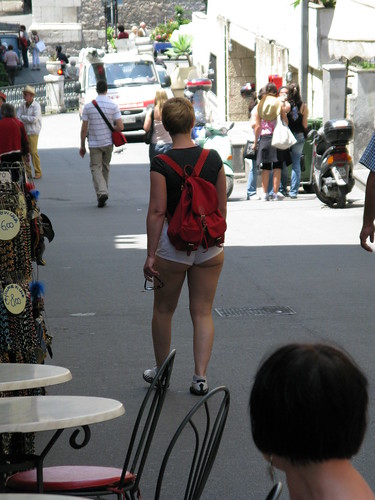 Back in April we had a FQoTD about street harassment. Now I don’t mean to be insensitive but I have to follow up on this question. You see, today as I was walking home from the metro I saw a woman wearing very similar shorts to the one from flickr above. And it got me thinking about this issue again. Let me just say I don’t mean to imply that anyone deserves harassment based on the clothes that they wear. I’m just wondering if it’s a smart choice in certain sections of the city where street harassment is a known problem. God knows, I hope women will be able to wear whatever they want to wear in any neighborhood of the city.

But it reminded me of when I was a kid going into NYC before NYC became much safer. When I would travel to the City I would always put my wallet in my front pocket. And I even remember school trips where they would tell those who wore jewelry to leave it at home. (There were lots of jewelry snatchings back then.) Of course nobody deserved to get there jewelery stolen but it was considered a prudent choice to leave it at home or put your wallet in your front pocket.

Anyway, my question is that maybe it’s not a good idea to wear shorts like this on certain streets, particularly if you are by yourself. Again, I’m totally disgusted and appalled by the street harassment stories we have heard. But isn’t it a good idea to dress slightly more modestly to avoid such unpleasantness? Or is that kind of like letting the terrorists win? I’m totally sincere with this query. I don’t know what the “right” answer is. I’m guessing there might be a slippery slope argument here. And I know there are harassers who would happily torment a woman regardless of what she is wearing. Like I said, I’m conflicted on this one.

So I thought I’d throw it out there for a FQoTD – in known street harassment areas should one choose their dress more cautiously?