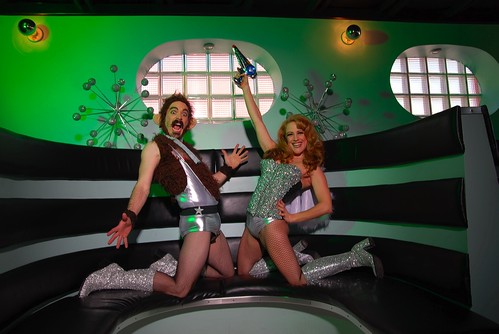 Sorry for the limited picks this week but I was out of town and wasn’t able to organize my emails. Continue to send your picks for next week. Even though it’s only one pick, this sounds phenomenal.

TICKETS: $20 in advance, $25 at the door. 21+ only. Advance sales at www.outofthisworldparty.com

An Out of This World Party at The Warehouse

On April 12, 1961, Russian Cosmonaut Yuri Gagarin embarked on the historic first manned space flight. Every year around April 12th Yuri’s Night parties are held all around the world; it’s like the St. Patrick’s Day for space. Since April 12 falls on Easter Sunday, and Saturday is a better party night, this year ABJ Productions starts the party early on the 11th, as a Countdown to Yuri’s Night.

“You don’t need a degree in science to appreciate the beauty and potential of human space flight,” says producer Jared Davis who has a self proclaimed man-crush on William Shatner (as Captain Kirk, of course). “This Yuri’s Night event gives artists working in many genres a chance to imagine the holiday in a way that is accessible to the average earthling.”

Over twenty visual artists will exhibit work that celebrates, reflects, and imagines space, from hard-core science to the low-brow culture. Many are innovators of Pop-Surrealism, Post-Pop, and/or Lowbrow, styles which frequently and freely embrace the imagery of science fiction and mid-century tropes. While these artists do not exclusively create work about space, Countdown to Yuri’s Night is an opportunity to assemble an inter-galactic art exhibition representing many interpretations on the theme. The exhibition is also available for viewing and purchase online at www.outofthisworldparty.com.

Taking the stage for two performance orbits (9 pm and 11 pm) is a Burlesque Space Show with an all-star line-up. “I am excited about the talent assembled and know that we have taken the party up a notch. Space exploration is all about progress and pushing limits. To make a shoddy space analogy, last year we went into orbit, but this year, we’re landing on the moon!” says Davis.

The show features Trixie Little and The Evil Hate Monkey, an award-winning acrobatic superduo who fight, dance, flip, and strip for the opposing forces of good and evil. Their adventures have taken them all across the US, and now they chart a course to conquer the galaxy.

Returning to Yuri’s Night for a second year, is one of the brightest planets in the night sky, Miss Saturn. Miss Saturn energetically performs with up to 40 orbiting rings (hula hoops) and is a mainstay of New York City’s top burlesque and Vaudeville scene.

Ready to take the show supernova is Dieter’s Dance Party Drill Team (DDP). This disciplined troupe of uniformed femme fatales seem to be ripped from Fritz Lang’s Metropolis. Inspired by the military, pom pom squads, sci-fi, and the Rockettes. DDP gets the party started….plus they have light-sabers!

L’il Dutch, an ardent fan of all things from the Atomic Age, returns to Yuri’s Night with her signature mix of smart and campy. Now one of the most recognized DC-based burlesque performers, she produces a bi-monthly show (The Dutch Oven) at DC’s Palace of Wonders. The other heavenly bodies in the show’s line-up are DC’s Blonde Burlesque Bombshell Bambi Galore, who brings out the geeky side of sexy, and Sugar Ann Spice, a cosmonaughty performer who is a regular space traveler within the DC/Baltimore burlesque universe.

Countdown to Yuri’s Night welcomes Atomic Mosquitos for two stellar sets. This band is rumored to have been transformed in a fortunate(?) accident on Three Mile Island that changed them into surf music-playing freaks. These rockin’ mutants play infectious tunes sprinkled with the spacey sound of a Theremin. With songs like “Alien Round-up” and “Planet from Outer Space,” we could not blast off without them!

In addition to the gallery show, the band sets, and the burlesque show, Countdown to Yuri’s Night also includes a Weird Science Fair, no longer just for middle school, see what amateur scientists have worked up for display and testing…; an Alien Egg Hunt, taking a cue from the Easter Bunny, aliens have hidden eggs all over the Warehouse with extraterrestrial matter inside; a Celestial Costume Contest, held during each Burlesque Space Show to reward those who have embraced interplanetary-chic; and last but not least, Chief Boogie Officer DJ P.Vo will be on board all night in the gallery spinning inter-stellar tunes that will bounce your moonwalk.

Oh, and did we mention the vodka? Countdown to Yuri’s Night is pleased to welcome back Stolichnaya Vodka—The Official Party Vodka, for a second year. Not only is Stoli Russian, like Yuri, but it is also the oldest continuously produced vodka label AND allegedly the first vodka served in space (Apollo/Soyuz mission). With $4 drink specials all night long, party travelers can get ready to blast off with some Stoli cosmic concoctions.