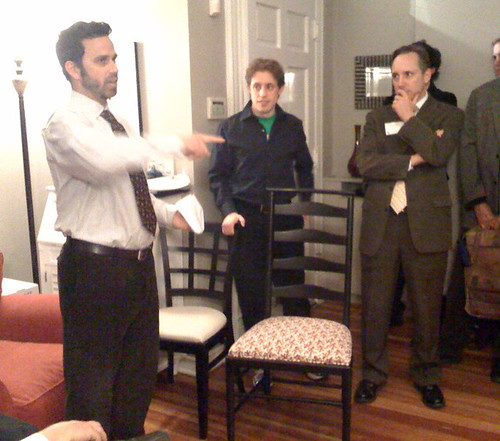 From left to right: Gabe Klein, Director of DDOT; David Alpert of Greater Greater Washington; and Stewart Schwartz, Executive Director of the Coalition for Smarter Growth

It was standing room only last Thursday evening in David Alpert’s Dupont Circle rowhouse.  The Greater Greater Washington blogger, jointly with the DC-based Coalition for Smarter Growth, was hosting an evening with Gabe Klein, the new director of the District Department of Transportation.  The crowd was a mix of students, local transit and urban planning activists, and interested third parties.  But everyone in attendance had one thing in common – to them, Gabe Klein was a star.

Before his appointment to DDOT in December 2008, Klein was the entrepreneur famous for helping start On the Fly, the company that has dispatched its seemingly ubiquitous food vending, eco-friendly smart karts across DC.  Before that, he was the local regional vice president of Zipcar, which has helped reduce DC’s dependence on non-transit transportation.  He was also previously the operations director for Bikes USA.  Klein was already well-known in the transportation and business communities for his environmental and transit efforts, so when Mayor Fenty announced his intent to appoint Klein to DDOT, it signaled a major commitment to moving DC’s transit initiatives toward new transportation solutions.

Klein’s vision is to turn DC into a leader in the field of alternative transportation—public bike systems, ride sharing, etc—and eventually convince people to think of alternative transportation as standard transportation.  He’s certainly got no shortage of ideas.  A strong proponent of DC’s Bicycle Program, he wants to expand access to public bikes throughout the city.  He also mentioned a new initiative to partner with Metro, Pepco, and automobile companies to lay infrastructure for electric cars along with new SmartBike locations.  Klein didn’t provide many details about the program, but if successful, DC would become one of the nation’s earliest adopters of this type of electrification.   Continues after the jump

Klein touched on many topics during his semi-adlibbed speech, including the streetcar proposals (“If we’re going to have a streetcar system, we need to really have a streetcar system,”) the final draft of the city’s Pedestrian Master Plan (“It’ll be up in a few days,”) and his initial discussions with Mayor Fenty over the DDOT position (“Why would you want to work in the government? You have a successful career.”)  Klein also said he wants to make DDOT more transparent, customer friendly, and accessible to citizens.  He mentioned that the DDOT website will soon include an interactive dashboard, allowing citizens to see the week-to-week progress of transportation projects throughout the city.

After Klein concluded his speech, members of the audience approached him with questions and comments.  Klein dutifully gave everyone who wanted it an opportunity to chat with him.  Whether because of the friendly crowd or the opportunity to discuss some of his favorite projects, Klein seemed genuinely engaged and outgoing, even late into the evening.  One audience member asked to get coffee with Klein to discuss waste and inefficiency in DDOT and other District programs.  “Beer is better than coffee,” Klein responded with a smile, handing the man his business card, “Send me an email, and we’ll set something up.”