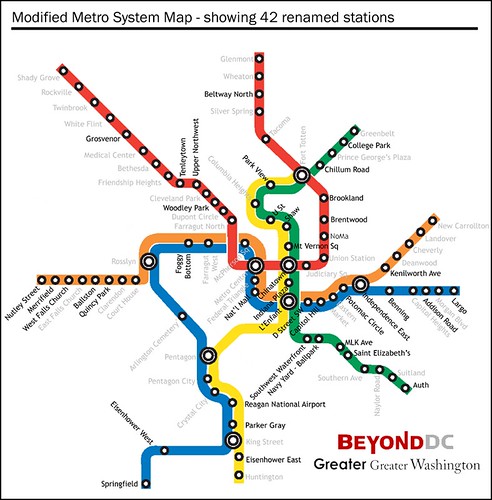 “PoP, the following was posted on GGW (Greater Greater Washington) and BeyondDC this morning — I thought you might be interested in posting a thread to ask people for their thoughts on whether the Petworth Metro should be renamed, and if so, what the new name should be (Tivoli East? j/k!):

“It seems a good time to look at the whole system. The map below illustrates a possible station renaming scheme. In some cases I renamed stations that are too long, or have too many acronyms attached at the end. In other cases I renamed to focus on a specific neighborhood or landmark. Where possible I’ve tried to stick to the two word maximum, but in a case or two have gone to three.”

I think it’s a brilliant question to ponder. They have suggested the Petworth-Georgia Ave. metro be renamed Park View. There are some other interesting suggestions like, upper northwest and beltway north among others. Personally, I’d be crushed if Petworth lost its name… Any metro names you’d like to change?