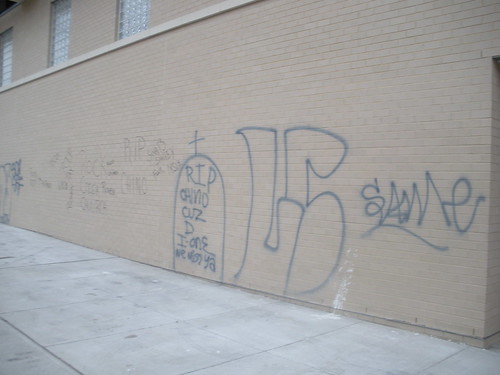 A reader tipped me off to some graffiti on the back of the new Park Place apartment building. I went by last Friday around 4 pm. I take a series of photos and when I turn around there are two thugs probably around 16-17 years old. They are looking at me with eyes of pure hate. If you’ve seen those eyes before you know what I’m talking about. One of them, looking at me with very hard eyes, says “what you doing taking pictures of that?” I’m caught totally off guard. Even though the area is close to New Hampshire Ave., as I was in the back I was completely cut off from an escape route. Despite the fact that I was 126 pound all campus wrestling champion, Miami Ohio, 1996 in these situations my first instinct is always flight. That was not an option. So in my most casual manner I say, I just like taking photos of art around town. The thugs do not respond. So with my heart pounding I walk very quickly past them so that if necessary I could run. This is wrong on so many levels. I have no doubt that the two thugs were affiliated with one of the crews that tagged the building. But what is this? Are we living in the wild west where I have to fear for my safety at 4pm on a Friday afternoon simply for taking a few photos. Who owns the streets, regular citizens or the thugs? I know MPD has a lot on its plate with the shootings at 13th and Columbia but this behavior is also totally unacceptable.

Anyway, you’ll see a reader’s comments below. So do you think this type of graffiti deters new businesses from opening up? Personally, I don’t think it does. It’s certainly not pleasant but there has been lots of graffiti on 14th Street in the Logan Circle area and that didn’t seem to effect new businesses moving in.

“so as you know graffiti is our hood is an issue. teenage hoodlums in our hood is an issue too, but i digress. anyway, walking to the metro today i noticed that on the back side of the new park place the building is completely graffitied. i cannot tell you how disappointed and upset by this i was, seriously i almost cried. on your post most people have expressed how excited they are to have new retail choices and how hopeful they are that these developments will become an anchor for more development in the community. well that’s not going to happen if before the thing is even finished it’s completely tagged with gang/hoodlum graffiti. what can we do about it? everytime i walk by the metro i get excited for the place to open. after seeing that nasty graffiti today, all i feel is sadness.” 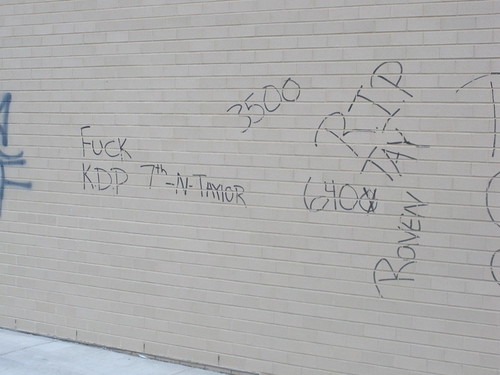 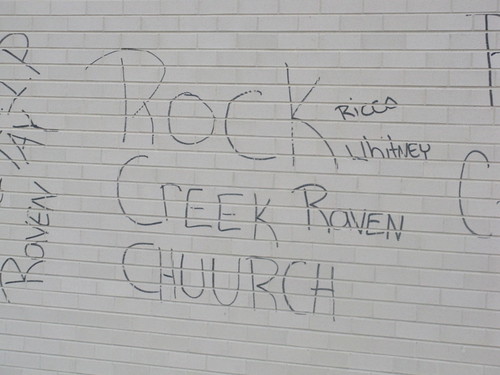 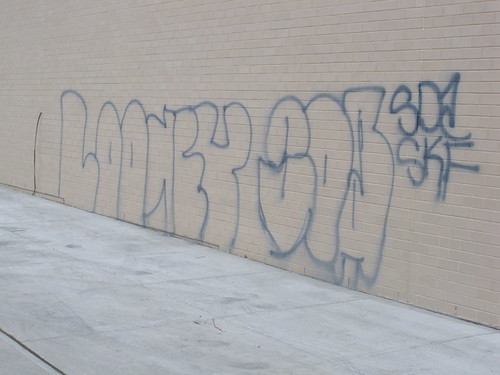