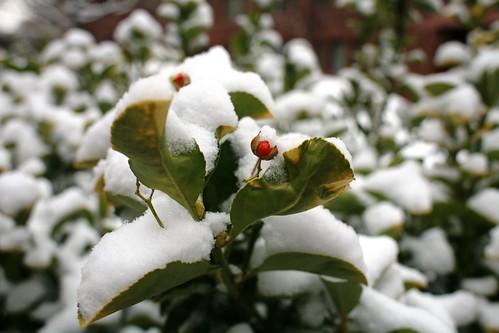 Esa flower ya no retoña, originally uploaded by Nestum23.

The National Weather Service is predicting between 4 and 8” of snow to fall in and around the District beginning late Sunday afternoon. The heaviest snows are expected to fall between 7pm and midnight. District snow crews treated all roads last night as the first of two forecasted storms moved through the area.

Mayor Adrian Fenty announced this morning that a snow emergency will be in effect beginning at 4pm this afternoon. “It is important that our crews have access to the roads from curb-to-curb in order to plow the snow,” said Mayor Fenty. “This is one of the first plow events we have had this season, and we want to ensure we are able to maintain clear and safe roadways as we move into Monday morning.”

During a declared snow emergency vehicles are not allowed to park on routes identified by the red and white “Snow Emergency Route” signs. Once a snow emergency is delcared, vehicles remaining on these routes will be ticketed and towed and charged a $250 fine. A map and listing of snow emergency routes may be found on line at www.ddot.dc.gov. Click on “Snow Plan – Snow and Ice Control.”

Also, travelers should be aware taxi cab fares can be increased to 25% during a declared snow emergency. There is a button on the meters that once pushed will automatically add the increase. Passengers may ask for a receipt to see the total charge. Continues after the jump.

The District’s Snow Team (District Department of Transportation and Department of Public Works) is planning a full deployment beginning Sunday at 2pm. Between 200 and 350 pieces of equipment including heavy and light plows, sprayer trucks and contract plows, if necessary, will be deployed to treat and plow elevated surfaces and roadways, including bridges, overpasses and ramps as well as roadways and residential streets.

The District Snow Team is responsible for 2,950 lane miles of roadway and 241 bridges including 69 primary and secondary routes, 82 residential routes and 75 miles of major roadways and Interstate Highways (part of the National Highway System).

When fully deployed, the team’s resources include nearly 350 pieces of equipment, capacity filled snow domes and over 100 closed circuit television (CCTV) traffic cameras to be used to track progressive treatment and to monitor the surface conditions of the roadway.

Motorists are advised to proceed with caution. Additional information on the snow deployment plan may be found at http://ddot.dc.gov.

The Mayor and the District Snow Team remind commuters and residents to:

· Help your elderly or disabled neighbors remove snow from steps and sidewalks.

· Remember to keep a safe distance from emergency and snow vehicles and please use caution when attempting to pass a snowplow. Give the drivers plenty of room to safely do their jobs.

· Clear all the snow and ice from your vehicle’s windows and lights – even the hood and roof – before driving.

· Please do not put snow in the street. Put all cleared snow, from parked cars and sidewalks in the “tree box,” front yard, or between the curb and sidewalk.

· Remember that driving on ice is significantly different than driving on snow.

· Use extreme caution and maintain safe speeds and distances from other vehicles.

· Remember even a 4-wheel drive SUV does not perform well in ice and additional safety measures should be followed.

· Be aware of road conditions, particularly black ice which can be deceptive in its appearance giving the driver a false sense of security on the road.

· Watch for slippery bridge decks, even when the rest of the pavement is in good condition. Bridge decks will ice up sooner than the adjacent pavement.