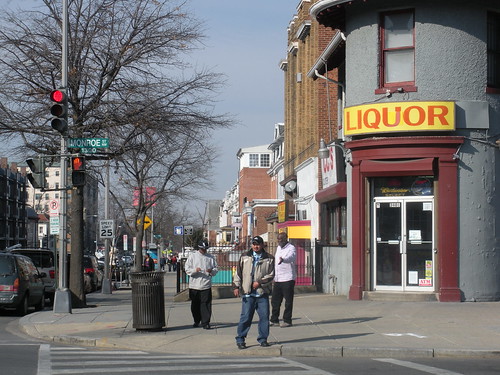 Forgive me if you have already covered this guy and his “deal”. I work in the office across the street – for over a week now, there’s a guy who blares (I mean BLARES) music and sells “wares” on 14th street NW, across from the Tivoli Building. It’s not really a huge issue – except his music is extremely loud and not my particular taste in music ;). But, freedom of speech (music), I guess. He definitely likes to boogie and dance around – it’s just simply amusing. I am surprised though, that no one has complained about the noise level. He might make for an interesting interview subject.”

I’ve been looking for this guy ever since I recieved this email last week but I’m not sure I found him. I did however find a boogying dude (photographed in the white shirt with his arm outstretched). across outside the liquor store singing and dancing and spinning and asking for money. But I’m guessing that’s not who you were talking about. So I guess I’ll open up this Dear PoP to any readers familiar with the “boogying dude” in the original question.

But I’m also interesting to hear what you guys think about panhandlers. I rarely encounter them in Petworth, Columbia Heights or really any neighborhood except for downtown. I asked a cop I saw on a segway if the panhandler photographed above was a problem and he said he had not received any complaints. So have you guys noticed any panhandlers in your neighborhoods? Are they overly aggressive or generally polite?