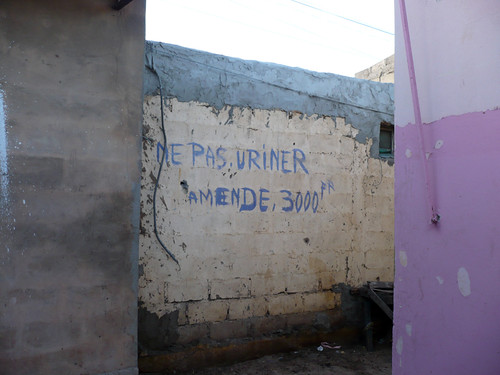 Don’t Pee On The Wall People!, originally uploaded by jsnowy2768.

“So, this is a “how to get along” question…I’m new to Petworth (2.5 mos), moved from Virginia and am enjoying learning my way around (thanks to the many contributors). I wasn’t naive when I bought my place (row house on an alley), but I’m having trouble understanding something going on in my alley. I live in a safe-ish area and as the days have gone by, I’m learning the patterns of foot traffic. A number of times (six I’ve witnessed before this weekend), people piss on my house, on my fence, etc. day, night, drunk or not (as far as I can tell). I’ve been pretty appalled, but have said nothing to the offender (as I’m kind of in hidden from view when I’ve seen it happening being behind my fence; also, I’m a woman living alone). This past weekend as the weather was nice and my neighbors had people over to hang on the front porch, I saw that the friends also use the alley as their port-a-john. I have no idea why they are not using the toilet in the house…So, my question is, how do I handle this? As my neighbors’ friends are not the only offenders, not to mention that I DON”T want to have that conversation with them (b/c no one should have to), how do I go about addressing/resolving this situation? Lights won’t make a difference as there are three street lights within arm’s length of my house and in alley. A flood light won’t bring any more light to the offense. Seriously, has anyone else had a problem that wasn’t really a safety issue but more of a (gross) nuisance and how did you resolve?”

Holy cow, what a brutal situation. I’m super curious to hear what the readers think because I’m not sure exactly what I’d do. But this is definitely unacceptable. I’d like to think I’d yell, “Hey, Oh, Don’t Do That There!!!”. I’m afraid you may need to have that uncomfortable conversation with the neighbors. Because, really, it seems like the only other alternative is to call the cops and the cops are not likely to get there in time. Maybe you could put a sign up that says “Not a Toilet”, or something like that. What do you think about this idea – talk to the neighbors but say something like “hey, I need your advice. I’ve been noticing lots of folks pissing in the alley, do you have any suggestions on how we can remedy the situation?”. In a really polite way of course. Yeah, that’s what I’d do. And if it still persists, I’d call the cops if it is a regular occurrence. Any other ideas?

Read more →
More Stories
Got To Give Props When Props Are DueGreatest City Sign Evah! (So Good I Couldn’t Wait ‘Till 4 O’Clock)