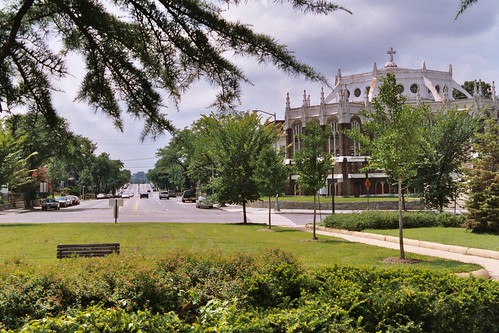 On Monday I posted to the Brookland list that I had lost a wallet in or near the Brookland / CUA Metro Station. I was fairly frantic at the time, having lost not only my ID, cash, and my credit cards, but proof of insurance and other critical pieces of my life – and worse, I was running from the Metro to get my son on the day my wife left the country on business.

I spent the next day canceling credit cards, getting a new driver’s license, and generally trying to reconstitute my life.

You can imagine my delight and surprise when the wallet arrived in today’s mail, completely intact – cards, money, ID, etc. Not a thing missing. There was a letter (unsigned) saying the person found it by the “Brooklyn Metro Station” and that I must have “been in a rush”. Truer words have rarely been written about the rush and my general
frame of mind that day.

There was no name, but an address, with the closing note, “God Bless.” Continues after the jump.

I just wanted to share this, because this example of nameless kindness and thoughtfulness is not unheard-of. In fact, it may not even be rare! In the past several months, due to general levels of sleep deprivation and overcommitment between work, home, child and other responsibilities, I’ve now lost not only my wallet, but my cellphone – TWICE – at a Metro station (Brookland and Fort Totten). In every case, it’s been returned to me by another neighbor or Washington resident, including citizens going out of their way to mail the items or leave them for me with a Metro station attendant.

From this one can conclude that (1) I’ve gotten extremely careless and forgetful in parenthood, and (2) the vast preponderance of our fellow neighbors and citizens are remarkably thoughtful, kind, and considerate – moreso than we may give them credit.

While a great deal of email traffic on the Brookland listserv and other neighborhood forums revolves around concerns about crime, town/ gown disputes with Catholic University students, and conflicting ideals about urban development, I’d like to take a moment to thank the nameless resident who went out of his or her their way to help a stranger, with no apparent expectation of reward. I am sure this person is a credit to his or her neighborhood and to Washington DC in
general.