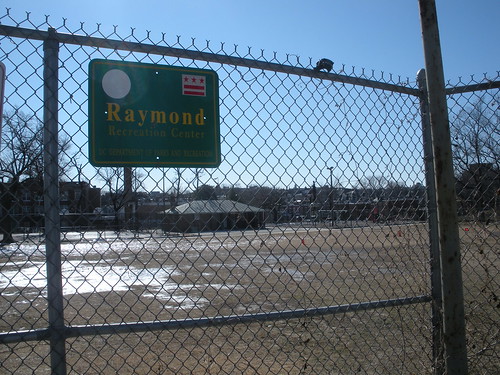 “Just thought you’d like to know, I happened to see someone posting a sign prohibiting dogs on the field at Raymond park (between 9th St. NW, Quincy St. NW, and Spring St. NW – the park a block away from the GA Ave/Petworth Station). This is a popular spot for off-leash play and it’s not uncommon to see people walking dogs there at various times of the day, so it gets a lot of use from the canine community. While I’m sympathetic to dog owners in the neighborhood (I use this park to walk my dog once in awhile as well), I guess we should also take into account the fact that there had been a sign stating that all dogs must be on a leash and owners must clean up after their dogs. The majority of owners seem to clean up after their dogs, but unfortunately the leash rule was often ignored. Hopefully the new dog parks planned for the area will fill the void, but in the meantime we dog owners should try to be exemplary citizens when it comes to dog walking etiquette in order to avoid more restrictions and to endear ourselves to our non-dog-owning neighbors and the rest of the community.”