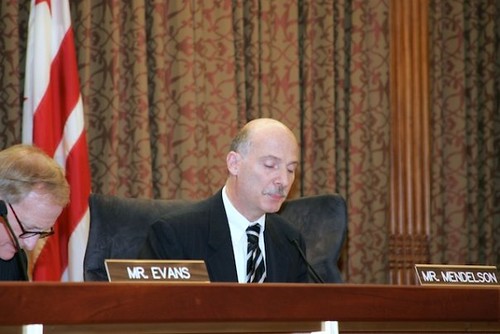 I had the opportunity to meet with Councilmember Mendelson at his office in the Wilson Building last Friday afternoon. We spoke for an hour and a half about the problem of crime in DC. We discussed the complexity of the issue and ways in which the council can and can not solve the problem. I don’t consider myself a journalist. Rather, I wanted to meet with the Councilmember so I could express some of the anger and frustration a regular resident feels when crime, particularly violent crime, is all too frequent in many of our neighborhoods.

I asked the Councilmember what his impression was of crime in the city. He replied that as he is an at large member of the council he visits the whole city. He has witnessed crime firsthand and was even a victim himself many years ago. He stated crime is at an unacceptable level put as chairperson he doesn’t want to be alarmist. He also noticed that many crimes have actually gone down over the last year. Nevertheless, he did acknowledge that crime was indeed a big problem facing many of the District’s residents, “my belief is that crime is unacceptable and we don’t seem to be getting the bad people off the street.”

He expressed on a number of occasions that the issue of crime cannot be solved by the legislature (City Council) alone. He cited the 2006 Omnibus anti crime bill where “we had virtually everything prosecutors and police asked for”. Mendelson believes that what needs to be addressed is the issue of the revolving door where the bad guys get arrested but don’t end up in prison. He offers a variety of reason to explain this phenomenon: Continues after the jump.

I asked the councilmember about mandatory sentencing for gun crimes and he explained that in many instances there are already mandatory sentencing guidelines. However in reality what happens is that the prosecutor says they need to be able to accept pleas because then they can get evidence on other crimes. This results in the prosecutor often charging the criminals with crimes that don’t have a mandatory minimum.

Mendelson believes there is a lot more to fighting crime than just the sentence. He believes the sentence itself is not a deterrent rather the value comes in taking the offender off the street. “We need to make sure that the charging decisions are changed to improve the closure rate so that more people are doing time”, he said “the biggest deterrents are getting caught and doing time. The closure rate is more important than the length of the sentence.”

I asked the Councilmember his thoughts on mandatory minimums for anyone caught with a handgun. Mendelson does not advocate a minimum for carrying a firearm without a liscence (CPWL) because there can be mitigating circumstances. He cited the case of Carl Rowan Sr., which took place a number of years ago. Carl Rowan Sr. came outside his home with an unregistered handgun when he thought he heard a burglar. In this case Mendelson believes that Rowan Sr. would not warrant a mandatory sentence. Current law recommends a first offense gets 6-24 months and a second offense gets 10-28 months.

Mendelson wanted to set the record straight on the Omnibus Anti Crime Bill of 2009. The next hearing is March 18th. He explained the delay because, “The mayor took two months to reintroduce his bill which was the cause for the delay”. He anticipates there will be a second hearing in May. Mendelson is hopeful that this bill will be moved before the summer recess. For comparison he said the 2006 bill took three readings and a took a year to pass. Mendelson said it’s not as easy as Peter Nichols would suggest “it’s a good bill just pass it” there are a whole range of opinions that must be worked out.

I pressed Mendelson to explain how crime can be reduced in the city if not by legislation from the council. He explained that the solution is a coordinated strategy between the council, all public safety agencies, the attorney general, and the courts. He said, “People should realize that legislation is not the answer to reducing crime. Rather it is the quality of police work, closing cases and charging decision, it’s the courts, the coordinated approach, the back of the system”, (What we are doing for the criminals before we release them from jail, ie vocational training). The 60% recidivism rate is unacceptable to Mendelson and he sees it as “low hanging fruit” that should be addressed right away. He did say that Police Chief Lanier has done a good job instituting the Most Violent Perpetrators (MVP) program that targets getting the most violent criminals off the streets.

Mendelson concluded that, “It is frustrating to everyone when some who commits a crime doesn’t do any time.”

He encourages all who are interested to attend the Public hearing March 18th at 10am, Hearing Room 412, John A. Wilson Building, 1350 Pennsylvania Ave., NW Bills that will be addressed include the “Omnibus Anti-Crime Amendment Act of 2009”, the “Public Safety and Justice Amendments Act of 2009” and the “Hot Spot No Loitering Zone Act of 2009”.

I think the Councilmember did a very good job explaining all the problems and roadblocks that exist in resolving this issue. He did a good job of explaining where improvements need to be made. However, I wasn’t left with a lot of hope that these improvements would be made. I agree with his assessment that the council in and of itself will not be able to solve the issue. However, I would have liked to have left the meeting thinking, ok- the problem is recognized and very smart and capable people are working on resolving it. I was left, simply, with the feeling of continued frustration. Yes, it is not just the council’s responsibility but, well, I just wanted some hope that the situation was going to improve. Perhaps this was an unrealistic expectation of mine. Despite Mendelson’s dedication and understanding of the issue I was left thinking this problem is so complicated that it’s going to continue for many years to come regardless of when the proposed bills are passed.