As mentioned on Saturday a taxi cab crashed through the front window of Solly’s located at 11th and U. 6 folks were hurt but fortunately none seriously. Credit to Solly’s for patching up the window the very next day and even having a bit of a sense of humor about it. Just to clear the record I spoke with Solly on Sunday and though DCist had reported that Solly was upstairs at the time of the accident he was actually in Kansas City and immediately flew back the next morning. A small silver lining from this ordeal is that Solly told me the new window they put in will open up onto the patio (previously the windows didn’t open). Once again, props to Solly’s for opening so quickly. 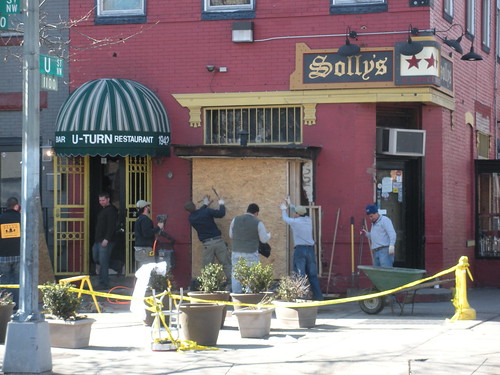