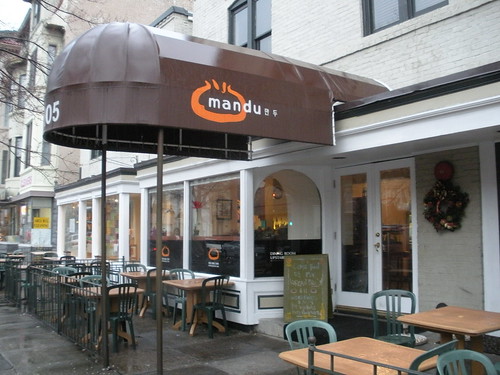 I once wondered what a Korean brunch was and since then having been hearing really good things about the restaurant that inspired that query. Mandu is located at 1805 18th Street, NW. You can see the menu here. So any fans out there? If memory serves the atmosphere was pretty nice. How’s the food?

Mandu is the family dream of Yesoon Lee, and her daughter Jean and son Danny. Raising her family in Northern Virginia, Mrs. Lee would prepare home cooked Korean meals for her children and friends, and would occasionally take them to one of the multitude of Korean restaurants in the area. As the children grew older and when both moved into the Dupont area, they both questioned why there were vast amounts of Korean restaurants that could be found in the suburbs, but hardly any in the District of Columbia. They saw plenty of Asian restaurants that combined elements of all types of Asian cuisine, but not a single restaurant that strictly served Korean food. This thought sparked the idea of Mandu, a traditional Korean restaurant that would be located in one of the most popular areas in DC.