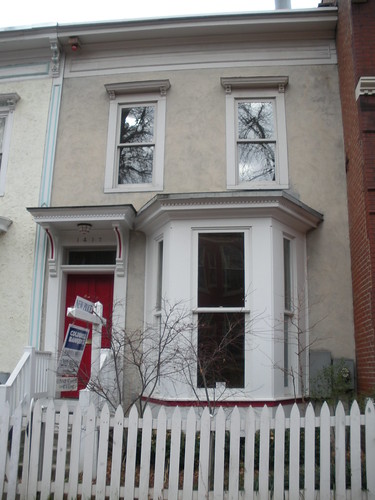 Before I go into the specifics of this sale, I wanted to mention that this property was listed by Connie Maffin, with Coldwell Banker, and was probably her last sale. Connie passed away on the 16th of February 2009 and is mourned by the many people whose lives she touched. She was Past President of the Washington DC Association of REALTORS (WDCAR), WDCAR’s 2007 REALTOR of the Year, and Chairperson of the Real Estate Board of the District of Columbia. Connie was a member of the Committee of 100, the city’s oldest planning organization and citizens’ lobby, a member of Lambda Alpha, an international land economics society, a longtime member and officer of the Logan Circle Community Association, and served as a trustee of the DC Preservation League.

General PoP reader commentary applauded the block (although the Gingko Tree issue was noted). Readers had mixed views on the benefit of the home having been built as recently as 1989, and many felt that the property was too small to justify the price.

The results show that the location called for a settled sales price over $700,000., Gingko Trees notwithstanding.

Read more →
More Stories
Photo Archives Caption Contest WinnerAre You Sitting Down? I Hope You’re Sitting Down, Cause This is Some Seriously Sweet Scuttlebutt