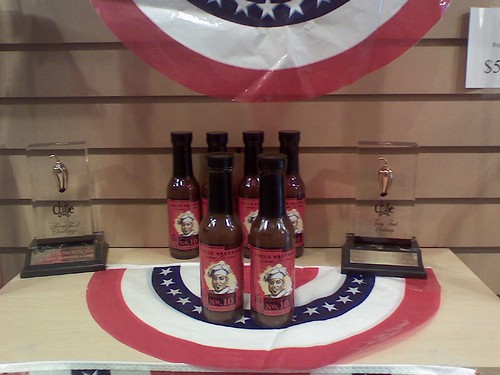 My senior year of college I went through a phase where I put hot sauce on just about everything I ate. However, due in part to my unsophisticated palate and in part to the unsophisticated grocery selection of Harrisonburg, VA, my love affair with hot sauce was pretty much limited to Tabasco. It was not until I relocated to DC that I realized there was a whole world of hot sauce to explore.

Last week after brunch with a friend, as we were walking up 18th Street, a familiar sign caught my eye. I’ve often wondered what ever happened to the hot sauce heaven that was Uncle Brutha’s Hot Sauce Emporium, formerly of Eastern Market. So I was pretty excited to see that they seemed to have relocated right into my own ‘hood! It turns out I had jumped the gun a bit and the set up was only temporary, but I’ll get to that in a minute.

I dragged my friend inside and we were lucky enough to meet Brennan Proctor, Mr. Uncle Brutha himself! Brennan is a 4th generation DC native, which is something of a rarity these days. He established Uncle Brutha’s in 2003, born out of his love for cooking and homage to his great granduncle George “Brutha” Hubbud, who, as family folklore states, came across the now-famous chilies used in the sauce while working as a Pullman Porter on the (Ed. note: there is some confusion as to whether there is an Underground Railroad connection.) Railroad.

Brennan began selling his multiple award winning hot sauce in 2004 as a vendor at Eastern Market. A short while later he opened a store on 7th Street SE, right outside the market. After the fire in April 2007 business began to drop and he just couldn’t afford to keep the place running. So unfortunately Uncle Brutha’s had to close its doors, but he continued to sell online and was most recently able to arrange the space on 1831 18th Street as a temporary lease from the owner of Sun Spectacles for the month of December. He is currently scoping out some more permanent locations, and one of them is right in our backyard! Brennan says he’s been looking at the retail spots in the first floor of the Park Place condos going up above the Petworth Metro. He’s still working out the details, but I have my fingers crossed!

In the meantime, Brennan will continue to sell his products, along with many others, through his website www.unclebrutha.com. The online selection is limited only to the Uncle Brutha brand sauces, but in the store he sells a wide variety of hot sauce, bbq sauce, spice rubs and marinades. There was also an entire shelf dedicated to Brennan’s nephew Ryan Neel’s new business venture, Icons, a t-shirt company. Hopefully all of this and more will make its way to the new permanent location. Brennan also is working on renewing a deal to make his products available at Whole Foods. Continues after the jump.

For those who have never tasted the deliciousness that is Uncle Brutha’s own brand of hot sauce, let me tell you, it is really freaking good. There are two variations, No. 9 (chile verde garlic and ginger) and No. 10 (four chiles and garlic). It’s hot alright, a little bit goes a long way, but they have a really great flavor and make almost anything taste just a little bit better! When he created his recipe, Brennan was looking for something with a lot of heat, but equally good flavor. As far as I am concerned he definitely met his goal.

If my endorsement isn’t enough to convince you, perhaps the opinion of Chef Rock (the new head chef at Ben’s Next Door) who lauds it as “the best hot sauce on the planet!” carries a little more weight. Chef Rock, also a DC native and the winner of season 3 of the reality TV cooking competition, Hell’s Kitchen, was one of Brennan’s first customers and brought Uncle Brutha’s hot sauces to B. Smith’s in Union Station, where he was serving as Executive Chef at the time. Despite his departure, Uncle Brutha’s hot sauce can still be found at B. Smith’s and is also taking up some counter space over at Ben’s Next Door, where he’ll be using the hot sauce for the wings and a couple of other recipes. I actually had a chance to meet Chef Rock the following evening when I went to check out the new spot on U Street with a couple of friends. He is really nice and very excited about getting started, and had nothing but good things to say about Brennan and Uncle Brutha’s. And, for the record, the restaurant is gorgeous and I have a feeling it’s gonna be a big hit, but that’s a story for another day! 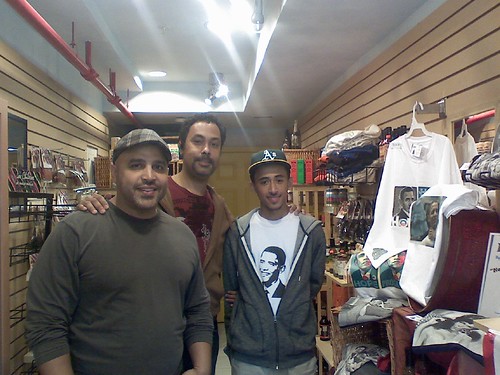