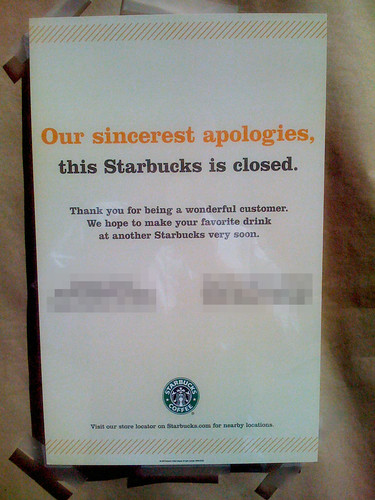 This Starbucks Is Closed, originally uploaded by shaycam.

A reader sent the news from the Huffington Post:

“The gourmet coffee chain plans to close 300 underperforming stores around the world _ including 200 in the U.S. _ by the end of the fiscal year in addition to the 600 U.S. stores it began closing this summer.”

The reader suggested that I do a “post on which DC Starbucks we could do without, or which ones are most likely to get the ax”. I think that’s an interesting idea. My guess is that it shouldn’t hit DC proper too hard since DC’s economy has been holding up fairly well compared to the rest of the US. But to ponder the question I’ve always thought it was a bit odd that there is a Starbucks on 14th Street in Columbia Heights and another one right across the street in the Target. I wouldn’t be too sad if they closed the one in the Target and maybe, oh I don’t know, opened up a Taco Bell there instead…