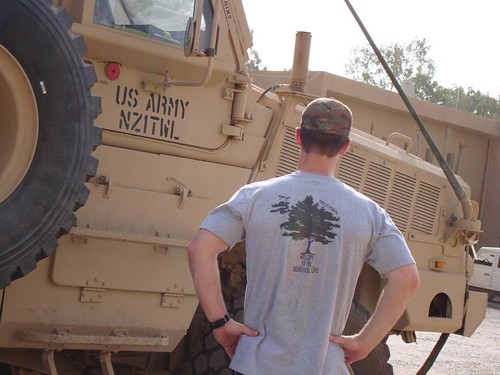 Ed. Note: I feel like an ass posting this because it is a bit overly complimentary. But when your buddy currently serving in the US Special Forces over in Iraq writes something like this, well, you just gotta post it and all I can say is thank you.

The answer is yes. There can be no doubt of it.

We are through the looking glass, readers; test-driving the gray matter of the adversary. We will leave the questions about the numbers of troops in foreign wars to the lightweights and the options for the future of the Patriot Act to the dilettantes. We, the serious, will consider ways to attack the disease of terrorism instead of fretting about its symptoms.

At its root, the act of terrorism is about desperation. It is a simultaneous cry for recognition and an intimidation attempt; a last resort for people that are deeply committed to a cause and believe there is no recourse. In most cases, those that flock to extremist banners of all types are earnest, vulnerable people that are preyed upon by manipulative masters. These terrorists are often simply pawns in the game. They seek a better world for their family, tribe, sect, race or nation and are made to believe that no peaceful means will accomplish that goal. Living in failed states can contribute to a feeling that no functional forum exists to audit grievances.

Nothing for certain. Just a few hypotheses.

I do have the luxury of a front row seat. As a special operator with 20 months of time down-range, I’ve had more than a few moments to cogitate about the nature of the beast. I should point out that persons of my ilk are “counter-terrorists” and by our very nature, we are reactive. We seek to counter what is believed to be an anti-social and illegal behavior. We have the capability to play defense and offense, but can only act on those that have already joined the game.

The Prince, good reader, is an “anti-terrorist” because his modus operandi defeats the conditions that cause people to become terrorists.

Simple: he provides access to local public officials, visibility on area school systems, detailed information about the places we live and ideas for enjoying free time. He provides us with a voice and a portal to connect to the people and the wider world around us. The Beautiful Life. Options. That puts him in a unique position.

Count on the PoP to make your world safer in 2009.