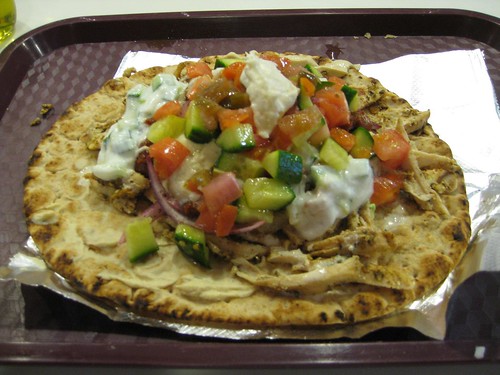 You can read the first entry here. Entry two is from Robert:

“SHAWARMA KING
Some of the better shawarma I’ve had in DC. Although shawarma is often billed as fast food in the Middle East, here it took a little longer to prepare, but my patience paid off. One nice feature of Shawarma King was the option to have the shawarma made on pita or on a larger wrap – same price, which is $5.95. I went with the wrap because it allows you to take better advantage of the a la carte servings (I piled them on). There are 16 different toppings to choose from – all looking reasonably fresh, which included, Lebanese hot sauce, pickled peppers, pickled eggplant, a cucumber/yogurt sauce (similar to a tzatziki sauce), as well as hummus and a delicious sliced fried cauliflower. I’m assuming Shawarma King is Lebanese-owned and operated, because in preparing my wrap they also offered to tinfoil it and throw it on a panini-style grill (normally done over a flame, but this wasn’t an outdoor cart). The result was an incredible Shawarma that is definitely worthy of carry-out.

One of the biggest highlights of Shawarma Spot – or at least I was first sold on it from their suggestive declarative statement on their menu – was their fresh brick oven baked pita. Beyond that, I thought the shawarmas were standard fair. I was disappointed that the toppings bar only had 12 options (three of which were very pedestrian toppings for a shawarma spot: sliced tomatoes, old looking sliced lettuce, and mayo) and was not self-serve (I like to have some portion control… or lack thereof). Also, hummus and baba were not even options in the toppings bar – you have to specially request baba on your shawarma. Shawarma Spot does have a greater variety of menu options, such as salads (fatouch, tabbouleh) and manakeesh (bread topped with jebna, lahma bi’ajeen, or zaatar). But there were no falafel options whatsoever!

In this shawarmoff, the winner is Shawarma King. You get the most value for your dollar with the King (the Spot’s chicken shawarma runs around $7.50 with tax included) and you have the ability to dish out as much of any of the 16 diverse toppings that you wish. Shawarma Spot’s space also seemed a bit cramped, and the messiness award would also go to the Spot – I had to resort to fork and knife… what an embarrassment.”

Entry 3 by Jeannie after the jump.

“First of all, both locations need to figure out a better ordering system. At both restaurants the lines were long, even though I didn’t go at a peak dining hour. They were long because their ordering systems were confusing and unclear. At Shawarma King, you put in your order at the register and then waited, and waited, and waited. If you ordered a wrap, you had to go up and tell them what toppings to put on the wrap for you. If you had a pita pocket, then you got your pita bread with slivers of meat in them and you had to put the toppings on yourself. All of that was not clearly explained to you when you ordered, so you left with a number and were just waiting for your food with no idea how or when it would come out. The same goes for Shawarma Spot, but it was much worse because it was far more crowded than Shawarma King, so not only were there long lines at the registers, but there was also a big crowd loitering around the food-receiving section with confused people waiting for their food. In my opinion, I think both locations need to ask people for the toppings upon ordering and bring out the food with the toppings already on.

OK, now for each location individually. First, Shawarma King. The Good: their meat was very good. Well seasoned and juicy. The toppings were also really tasty, particularly the cauliflower. The Bad: Their pita bread was awful. It was literally store bought pita bread pockets that I could have picked up from Giant. I saw the workers taking the pita bread out of store bought packages. Also, the ambiance of this location is stark and empty feeling. There are no real decorations up on the walls, and the lighting is a little harsh. I didn’t want to eat in there and wished I had taken my food to go, which is what I will probably do often, because the meat and toppings were very good.

Shawarma Spot. The Good: the ambiance of the location is great. I love the vibe of the place, the lighting is really inviting and it just looks like a fun place to eat. Also, the pita bread at this location was incredible! Like no pita bread I’ve ever had before … it was crunchy on the outside, soft on the inside, and really very tasty. It didn’t hold up well with a lot of toppings, but I enjoyed it so much that I wanted to take some pita bread to go. Also, their hummus was very good. The Bad: Their meat was not good at all … it was dry, not seasoned, and too thick. If you’re going to open a shawarma place, make sure you have decent shawarma above all else! Also, the toppings were not as tasty as Shawarma King. If I go back to Shawarma Spot, I’ll probably just order pita bread and hummus and dine in with friends.”

Read more →
More Stories
Good Deal or Not? Under $250K For A Classic Rowhome EditionFestivus Over – Adams Morgan Kiosk Now Accepting Messages To The President