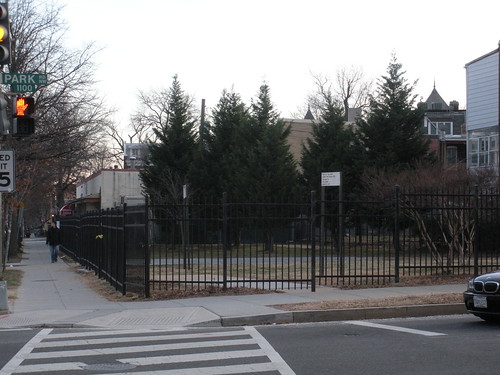 Last Friday I wrote about the coming dog park at 17th and S Street, NW. In the comments section a reader wrote:

“For a variety of reasons, the Park Road space will not be an “official” dog park anytime in the immediate future (if ever). However, dog owners may note the improved layout of the space (there should be gates going in to fill those two spaces in the fence at some point) which happens to be conducive to use by dogs, and should feel free to congregate, informally, accordingly. Hopefully, regular users will take an interest in keeping the space clean, tidy, and green.”

I spoke with some folks today that confirmed the above comment. The space is owned by Metro and the gate will be intentionally unlocked so that folks can bring their dogs there. MPD won’t bother you because it is Metro land but I agree with the original commenter that it will be up to the community to keep the space clean. I think Councilman Graham probably deserves a fair share of credit as he did quite a bit to make this an official park but it seems to me an unofficial park should be just as good. From what I understand it’s good to go right now. So for folks with dogs be sure to write me and let me know how it goes.