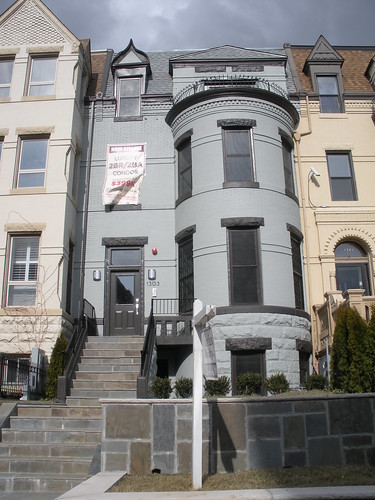 This converted Rowhome is located at 1303 Clifton Street, NW:

More info and photos can be found here.

I love this location because it is right near that part of 13th Street where you have an amazing view of downtown and the monuments. It is also very close to the building we judged yesterday.

“I used to live next door (the white house on the left, looking at the photo) in a really nice condo conversion. When I lived there (2006-2007) the house next door was incredibly scary. It was falling down in terrible repair, and we used to joke about the one guy who lived there, who was bizarre beyond words. He never talked to anyone, and we took to calling him Boo Radley. Once our neighbors on the top floor told us they could see his roof, where he was keeping rows and rows of 5 gallon buckets filled with dirt that he would tend, but he’d take them inside before we could see what sprouted in them. We were actually worried their weight would cave the roof in.

Not long after I moved out (end of 07), I walked by and saw a sign had gone up by a contractor. They spent about a year quite literally gutting the entire house, and now they look like really sweet condo conversions. $499 is kind of brutal, but some of them have outdoor space, and they’re near the corner of Clifton & 13th, at the top of Cardozo which has the sweet view of the Capitol building and Washington monument, where everyone watches the fireworks. My upstairs neighbor there had his condo on the market, with similar specs as these new ones, for over a year at about $450K, with multiple price drops, until he gave up had to rent it out. I’m curious how this building will do.”

The asking price is $499,000. What’s the premium for an amazing view? What do you think of the condo itself?