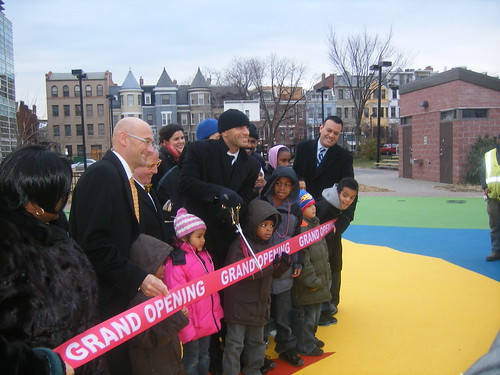 A mere couple of months ago PoP spotted a pretty weak looking park at 14th and Girard St. Then just a couple of weeks later he got word that the park was getting a facelift, and this past Monday I attended the ribbon cutting ceremony for the brand new Girard Street Park play surface area. If only everything in the District happened this fast! 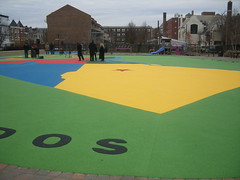 Back in August the park was pretty sad looking (http://www.princeofpetworth.com/?p=3652) so this is definitely a HUGE improvement. Mayor Fenty, Ward 1 councilmember Jim Graham, and DC Department of Parks and Recreation Director Clark Ray were all there for the big event, as the largest rubber playing surface in the entire District of Columbia was opened to the public.

The park is also home to some basketball courts and a community garden run by a program called CityBlossoms. I got to meet Executive Director Rebecca Lemos who explained to me that the garden is tended to by children from some local community programs, including Centronia, Community of Hope and the Columbia Heights Youth Organization. Right now there are some “winter crops” growing, including some yummy looking cauliflower!

The park looks great now, and I really hope it stays that way. I live right around the corner and have seen some pretty shady activity going on over there. But it’s my hope, along with most of the community I’m sure, that people respect this great new space and try to keep it safe and clean for the children of Columbia Heights!