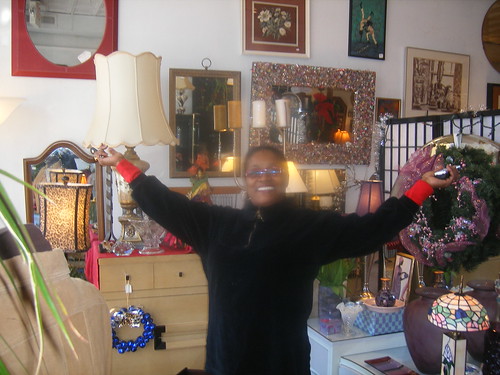 Even though all of the developments are fairly recent, sometimes I find it hard to remember what Columbia Heights looked like just a couple of years ago. Heading north on 14th Street kind of brings back the memory, but it seems as though development is even creeping up that way. Little by little new store fronts are popping up further up the road, perhaps setting the stage for a massive overhaul of the neighborhood, or perhaps just making a relatively run down “Main Street” a little more neighborhood-friendly. Personally, I am hoping for the latter, but either way I was pretty excited to discover Esther’s Treasures. 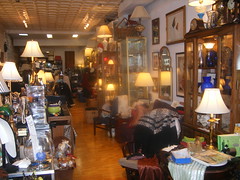 Just past the Mocha Ground at 4277 4722 14th Street, Esther’s Treasures has been open for just over a year. In fact just this past weekend they held an anniversary party and, for the entire month of December, if you spend $35 or more you get a 25% discount! Esther Williams, the owner and namesake, is a long time DC resident and something of a local celebrity. She’s actually a professional singer and is married to Davey Yarborough who is also a professional musician as well as the Chairman of the Instrumental Music Program at the Duke Ellington School. Continues after the jump. 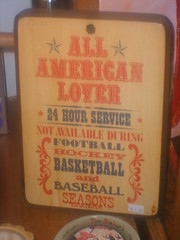 Though her music is her day job, the business of thrifting is in her blood. Both her mother and grandmother collected and sold antiques and she learned at an early age that you can have nice things without spending a lot of money. When she saw that the store was up for rent she knew that this was an opportunity she had to jump on. She bought the place, put a lot of time and effort into sprucing it up and after a little while had a store of her very own to showcase and sell her wares. She picks up most of her stuff on antiquing trips but she also does some consignment – mostly furniture and clothing. If you are interested in consigning, you can make either call or stop in to set up an appointment with Esther. The website is still under construction, but all of her contact information is listed here at www.estherstreasures.com 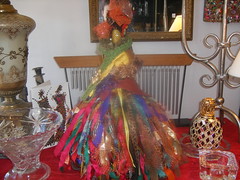 There is some really fun and funky stuff in the store. There are tons of cool lamps and mirrors and lots of fun costume jewelry and vintage clothes. I asked Esther if she had a favorite item in the store and though she admitted she has a bit of an obsession with lamps, and spoke very highly of the glass fragrance lamps she sells, she said she truly loves everything and puts great care into selecting the items she sells. My personal favorite was a mirror in a confetti covered frame that unfortunately didn’t photograph too well, but if I had the wall space for it I totally would have bought it. She’s also got some kitschy vintage signs and a great collection of old school CDs and tapes. 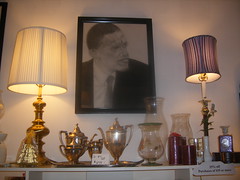 This place is really great, but I think it’s even better that it’s run by such a nice woman who also has a vested interest in the neighborhood. Esther has been living right around the corner for about 15 years and has seen the area through quite a bit. She thinks the changes are for the better and hopes to see more new places opening up. I also got a tip that there may be a new sit down pizza place opening up on the corner of 14th and Decatur – I don’t know if that is old news in PoPville or not, but it sounds good to me!