Get our email!
Search
Petworth, Restaurants 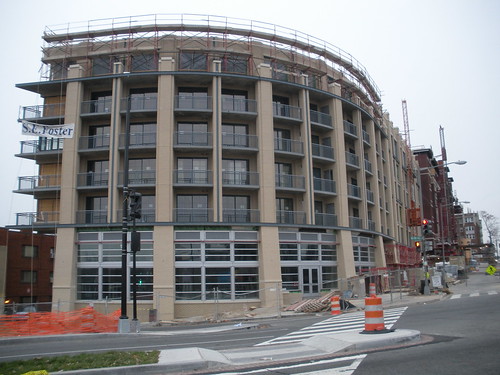 Chef Gillian Clark formerly of Colorado Kitchen has signed a letter of intent to open up a restaurant in one of the spots! I think this is phenomenal news. The restaurant will be called the Meeting Place and will feature “classically southern” food. Oh man, this is going to be sweet! From a press release:

Washington, DC – December 8, 2008 – Asadoorian Retail Solutions announced today that local celebrity chef Gillian Clark has signed a letter of intent for 4,000 square feet at Park Place. This will be the 4th location operated by Clark in the Greater Washington, DC Metropolitan Area.

Under development by Donatelli Development and scheduled for delivery in 2009, Park Place is a mixed-use development with 161 residential condominiums and 15,000 square feet of retail space. Located atop the Petworth Metro Station, at the intersection of Georgia and New Hampshire Avenues, NW, Park Place anchors the gateway to Petworth, an energetic community that is on the rise with many new developments underway. “Our goal is to develop a destination shopping and dining environment that offers high-quality and unique retail choices for the neighborhood.” states Chris Donatelli, President of Donatelli Development. “We have received a positive response from the market on our plans and securing the interest of Gillian creates a great anchor for the project.”

No stranger to the Petworth area, Clark is a ten year resident of the neighborhood. Coupled with a resume of seven restaurant openings under her belt, she knows food and she knows the neighborhood. “I am thrilled at the opportunity to open a restaurant at Park Place. It is an exciting project in a dynamite location.” states Clark. “I understand what food means to people, and I know what is missing in this area. The menu of the new restaurant will be classically southern, illustrating the trend to environmentally friendly cooking, a characteristic of the Southern food way. It will be a celebration of food in its simple forms and traditional cooking methods that make simple ingredients sublime. We’re going to breathe life into a food tradition that has been not given its full due in these parts and I think there is a great population of folks that are going to appreciate that.” Continues after the jump.

The Meeting House will occupy the highly visible corner of the building, with soaring ceilings approaching 20 feet. The space will be light filled with food icons in stained glass and the ceiling framed in wood beams to evoke the feeling of a gathering place built for worship. It will be spacious and light-filled and will be the appropriate venue to house a very open dining and serving concept.

The menu will be an adventure featuring: farm raised catfish, beef short ribs, fresh gulf shrimp, rabbit, crayfish, trout, pheasant, and pigs feet. The bar will bring back the classic cocktail tradition by featuring mixology based upon original recipes and almost forgotten methods.